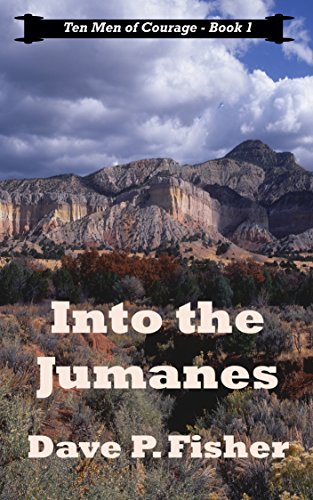 Book: Into the Jumanes (Ten Men of Courage Book 1) by Dave P. Fisher

Brothers, Troy and Jason Delaney fought in the last battle of the Civil War at Appomattox Station. Troy wore blue, Jason gray. As General Lee signed the surrender both brothers headed back for the family farm in the Shenandoah Valley only to find that the Union Army had burned the valley flat. They headed west together.

Brody Maguire, champion bare knuckle fighter, and Teague Blackburn, his promoter and manager head west ahead of the New York City gangsters that they had crossed.

Cattle drovers Ace Hawkins, and his cousin Kip Nichols leave a dead man in Baxter Springs and head for west Texas to lay claim to the inheritance they were denied. Lon Caldwell, and Hap Wickham ride along to back them.

Griffin Allen, Confederate sharpshooter was in Mississippi when he got the word that General Johnston surrendered at Bennett's Farm. Unwilling to surrender his guns he pointed his horse west and rode into Texas.

Nacio Fuentes, ex-bandito is looking for a new start, and revenge against bandito leader Amidio Vasquez.

The Army had deserted all the forts in west Texas and New Mexico, sending the soldiers to the war. The country was left wide open to Comanche raids, and worst of all, the thriving slave trade carried on by Amidio Vasquez, and the unscrupulous mine owners who bought men, women, and children to work in their mines.

When Vasquez raids a Franciscan mission and steals the friars and orphaned children in their care, ten men who found themselves in the Llano Estacodo on the Texas plains, who have nothing in common except a Code of Honor throw in together to hunt down Vasquez and put an end to the slave trade.