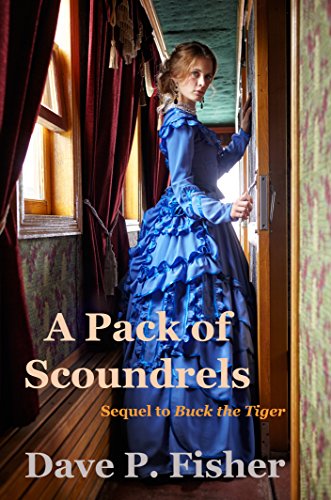 Book: A Pack of Scoundrels by Dave P. Fisher

about this book: A Pack of Scoundrels, the sequel to the Best Selling "Buck the Tiger".

Three years have passed since Pinkerton Agents broke up the Chicago crime syndicate that had opened shop in gold-rich Helena, Montana. Three years since Virgil Creede took up Dora Pickett's request to help her brother, Fred escape the ruthless kill order placed on him by their father, Jerome Pickett.

Now, Butte, Montana is on the verge of a copper boom where men stand to become millionaires overnight. The smell of money draws the rats from their holes.

Gordon Fox is setting himself up to take over Butte's wealth.

Bella Priest, the charming murderess from New Orleans is coming west with her assortment of criminals to join Fox, but Bella has her own ideas about taking over.

All-in-all, a pack of scoundrels biting and clawing, double-crossing and back stabbing for the wealth and power of Butte's copper future. Little did they know that they were in Virgil Creede's country, and when one of them once again puts a kill order out on Fred Pickett they got on Virgil Creede's bad side.

Between Virgil, and Pinkerton Agents Granger Hawkes and John Greene, the scoundrels have bit off more than they can chew.