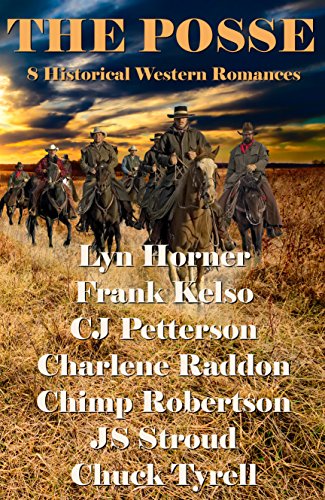 about this anthology: When you see a new release on Amazon by an indie author, are you hesitant to try it because you don't have any idea if you'll like this author's style or voice.

The Posse book is an anthology of 8-western romance stories by seven different authors. This short story form gives the reader a smorgasbord of different styles and voices. The opening story presents a western variation on Romeo and Juliet; while the supporting characters are feuding, the young lovers only have eyes for each other—until her father breaks in the door.

Each of the author's life journey has given them a unique outlook on life, and how each saw life happening in the old west. Each has published before, but decided if they were going to become better known, they needed to join to promote their books. In the western tradition, they formed "The Posse," a group riding together to be more effective than one riding alone.

One of the authors, Lyn Horner, posted a blog on how the term "posse" came into use. It is a Latin term. Cromwell used "posse comitatus" in the English Revolt to describe men (formerly, the King's Army) assigned by the Central authority (Cromwell) to make arrests and keep order in the absence of a lawful King. Cromwell's misuse of central power, led the framers of the U.S. Constitution to place limits on the use of "posse comitatus." However, local, county, and state officials are allowed to gather (and deputize) people to bring law-breakers to justice; the term was shortened to "posse" for easier pronunciation.

The Posse, in this case, is to gather new readers and introduce them new stories. We hope you enjoy getting to know each of The Posse members and read more of their novels and short stories on Amazon.

"If you like classic westerns with a historical and romantic touch, The Posse is the book for you." Editorial Review. IWIC