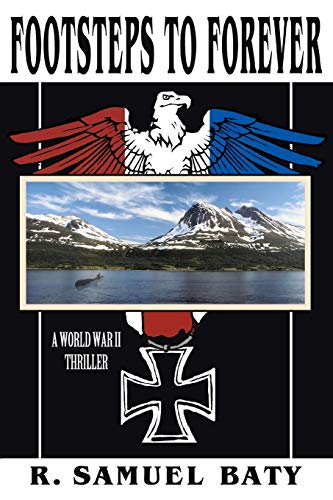 about this book: "Footsteps to Forever" is a World War II thriller. It is a great read for men and women of all ages. It has world leaders such as Roosevelt and Churchill, and it has fictional characters that inspire romance, suspense, and adventure. The story is told from both the allied and German sides, so it should be of interest to people in a number of countries.

The book starts out with President Roosevelt concerned that the Germans may harness nuclear energy. This is in the fall of 1941. Roosevelt convinces a Nobel Lauriate to go to Norway and spy on German progress. Then the Japanese attack at Pearl Harbor, and America is thrust into the war. The Lauriate is now behind enemy lines! Roosevelt then turns the responsibility of getting the Lauriate out of Norway safely over to General George Marshall, Chief of Staff of the U.S. Army.

Marshall chooses a unique pair of Army specialists for the task. One is a beautiful Army Nurse (Jennifer Haraldsson), and the other is a new Army lieutenant (Jonathan "Dude" Partude). Both are excellent skiers and fluent in the Norwegian language. Marshall tells the couple that their careers won't be negatively impacted if they decide not to take it. After an emotionally charged evening, though, the two decide that they will tell the General the next morning that they accept!

The next morning the General is very happy that the two lieutenants have decided to accept. He sets up a series of briefings, and soon Jennifer and Dude are headed to Norway.

After meeting with interesting members of the Norwegian Underground, the two lieutenants finally rendezvous with the Lauriate. They brief the Lauriate on their escape route to the sea, where a British submarine will take them to safety. The Lauriate is somewhat dubious, since he is elderly and realizes that meeting the submarine must take place within a reasonable window. Jennifer and Dude assure him that odds are that they will make it!

The Germans have gotten wind that there is a famous American spying on their nuclear energy progress. They therefore make an all-out effort to capture him. Two German Officers, one a typically cruel Gestapo Officer (Major Peter Schmidt) and the other a surprisingly caring Officer (Captain Otto Bruner) are tasked with capturing the Lauriate. Unfortunately, the Lauriate was right. He and Dude both perish along the way to the sea. Jennifer is left to cope with her great loss, as she and Dude had fallen in love and were going to get married. Jennifer had also become very attached to the Lauriate.

Jennifer shares her grief with the British Officer, Francis Dunbar. Dunbar had been a huge help in getting Jennifer out of the Norwegian situation alive. During her time in London, Jennifer had the opportunity to meet with Winston Churchill and the ever-present Francis Dunbar. Churchill took a real liking to Jennifer and treated her much as he would a daughter.

Jennifer has the opportunity to go on the Dieppe raid and save Francis Dunbar's life. As the war is progressing, Jennifer was thrust back into the Army Nursing Corps and preparing to go into Normandy, France shortly after the landing.

The book traces Otto Bruner's adventures from his time in Norway. After a brief leave at home in Berlin, Otto goes to the Russian Front. Fortunately, Otto works for a very fine German Lieutenant Colonel who allows Otto to be himself. Otto is surprised by his own capabilities and success. Finally, one day, Otto is awarded the German Iron Cross by none other than Genaral Von Paulus, head of the German Sixth Army. Von Paulus tells Otto that he will be going to Battalion Officers' School in France. After Von Paulus leaves, Otto's boss tells him he shouldn't come back to the Eastern Front. After all, the hand writing was on the wall by then. Things were only going to get worse!

Otto did very well at Battalion Officers' School, and he was given his choice of assignments upon completion. Remembering what his boss on the Easter Front had told him, Otto selected to work on the Atlantic Wall. The purpose of this Wall was to throw the Allies out of France when they attempted to land. Unfortunately, Otto was selected to work on the Wall at a place the Allies would call Omaha Beach.

Then the fateful morning of June 6, 1944 occurred. Otto was bounced out of bed by incoming shells landing and the sound of the claxon – which was meant to get everyone to their battle stations "on the double." Otto raced to the Wall, and he was amazed at the huge number of Allied ships that were now just off the beach. He started shouting orders, as he realized the Field Marshall Rommel was right in his recent utterance – they needed to throw the Allies back into the sea or it may be too late.

For what seemed like an eternity to Otto, the Allies were held at bay. Then the Allies started moving inland. During their inward push, Otto was severely wounded and taken to an American Field Hospital. There he lay in a coma for a significant amount of time.

After the beachhead was secured, the U.S. Army medical staff came ashore. Nurse Jennifer Haraldsson took an immediate liking to German Army Officer Major Otto Bruner. Even though Otto was in a coma and unconcious, Jennifer worked with him daily to bring him out of the coma.

As Jennifer studied Otto as he lay motionless, there was something about him that seemed familiar. Therefore, she decided to contact the U.S. Army Intelligence Unit to see if they could identify where he had been and why she might feel this familiarity. At the same time, Otto was coming out of his coma.

Finally, the Intelligence Unit confirmed that Otto had been in Norway. Even though Otto had not been directly responsible for either the Lauriate's or Dude's death, Jennifer could not absolve him from the responsibility. She therefore asked to be transferred as far away from Otto as possible. The Army was realizing that the War in Europe was ending, and they wanted to build up the Pacific theater. Therefore, the Army gladly transferred Jennifer to the Philippines.

After hard-fought gains in the Pacific, atomic bombs were dropped on the Japanese cities of Hiroshima and Nagasaki and the terrible war ended. Long ago, at the beginning of America's involvement in the war, Jennifer proposed that they meet to celebrate the end of the war 'under the clock' at the St. Francis hotel in San Francisco. To this end, her proposal was carried out. Francis Dunbar, Dude's brother, Jacob, and members of the medical staff attended. After heated discussions, others convinced Jennifer that Otto was just doing his job in Norway and that she shouldn't hold anything against him. She finally agreed and knew that she must find out if she loved him. While she had previously thought that her greatest adventures were behind her, she now knew that they were just beginning! This revelation laid the beginnings for the sequel "Darkness into Light."

The author had originally planned to just write the one novel, "Footsteps to Forever." Then he became attached to the characters and couldn't stand to have them languish. Thus, he has now written three more novels in the series. You can read about them at his website (www.sambatybooks.com). The fourth and final novel in the series takes the major surviving chracters up to senior citizen status. It makes the series the perfect gifts and a 'must read' endeavor.