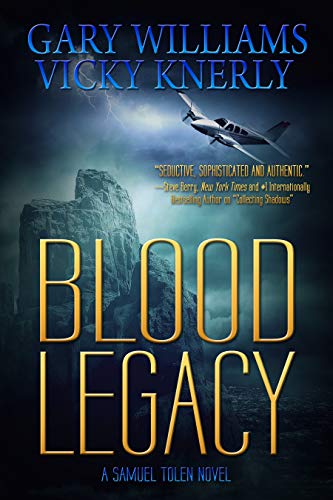 about this book: Blood Legacy takes CIA Agent Samuel Tolen on a whirlwind global chase to uncover secrets about his own family's lineage and to thwart a plot utilizing a newly discovered Temporal Object Displacement theory that could change history and end humanity. In the process, another secret of Adolf Hitler is exposed; one that's worth a fortune.

As with our other novels, Blood Legacy is a thriller, written for those interested in action and adventure, historical mysteries, and the hunt for treasure.

As with most of our novels, it took about six months to write. Most of the research is done in advance, but inevitably some must be done while the writing is in process.

This was the easiest title for us to agree upon out of our eight novels. It fits in every aspect. It was the first time our publisher accepted our first recommendation.

We tend to create storylines where the protagonist believes the antagonist is going in a certain direction based on a certain motive, only to have the rug pulled out from under the protagonist (and the reader) when it is discovered that things are not as they appeared. This generally makes for a complicated storyline. Thus, the hardest part is working the outline so that the reader is surprised and deceived yet can follow the story and feels as if they're experiencing the adventure with the protagonist.

Intensively. We always use historical backgrounds in our novels, and if we don't get the history right, readers will be quick to let us know where we made errors. We make a point at the end of each novel to inform readers about which information was historically accurate and which information we created from our imagination to blend into the story. We feel this is important.

We learned quite a few things actually. The history of Adolf Hitler's reign might be called both terrifying and fascinating. We uncovered many obscure facts, such as Hitler's intense dislike of cats, his fanaticism with the old American West, and his love of painting pictures. We also discovered that, within the last five years, three key events occurred, which we used in Blood Legacy:

1) The last living person who was in Adolf Hitler's bunker when the führer died, Rochus Misch, died in 2013,
2) A copy of Hitler's Mein Kampf, found in his Berlin apartment in 1945, was auctioned in 2016, and

3) The red Bakelite telephone from Hitler's bunker, which he used to send millions to their death, was auctioned in 2017.

If you enjoy history woven into a story mixed with action and suspense, which leads to a magnificent treasure, we believe you'll like Blood Legacy as much as we enjoyed writing it.