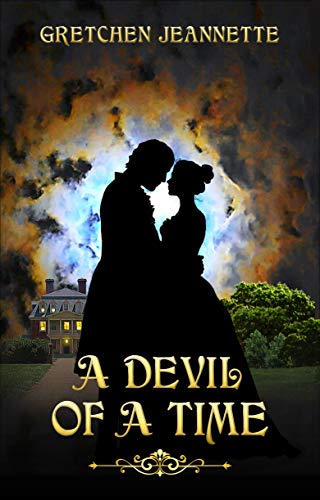 Book: A Devil of a Time by Gretchen Jeannette

about this book: I set out to write a novel about the end of the American Revolution. What evolved is an historical thriller that ventures into the gray area between good and evil. A word of warning: "A Devil of a Time" contains violence some may find disturbing.

Following the American victory at Yorktown, Captain Niall McLane finds himself outcast and alone in Williamsburg, Virginia. A survivor of brutal captivity and horrific battles, he struggles to purge the cold-blooded beast that has taken root inside him. Without prospects or hope, he reunites with his friend and gentleman plantation owner, Andrew Wade, whose life he saved in battle in Kentucky.

Andrew also wrestles with an inner demon. Once a charismatic soldier full of worthy ambition, he returned home from war a shattered man, maimed through his own cowardice, a truth known only to Niall. Andrew's plantation, Farview, suffers as much from his negligence as the effects of the war.

While Andrew pursues an increasing dependency on liquor, Niall finds renewed purpose in running Farview. Niall develops a friendship with Andrew's young wife, Clarice, and together they begin to turn the failing plantation around. But no matter how hard Niall tries to escape the past and get on with his life, the past will not release him. When a grotesque murder occurs in nearby Williamsburg, Niall's reputation as a merciless Indian fighter and scalp hunter turns public opinion against him. Worse, the killer has only begun to rampage, his sights set on those close to Niall.

Now the hunt for evil is on...

Praise for "A Devil of a Time":

• "One hell of a fulfilling read." — E-book Planet
• "This is adventure at the finest level." — GoodbooksToday
• "A devilishly good novel." — The Kindle Book Review
• "This gripping tale will keep you on the edge of your seat." — Onlinebookclub.org