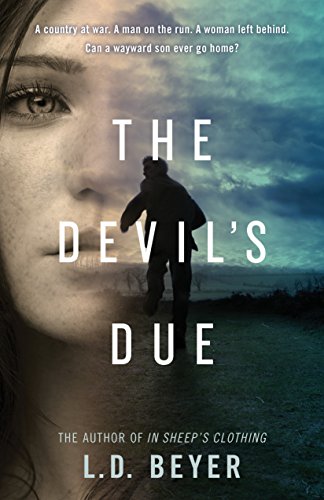 Book: The Devil's Due - An Irish Historical Thriller by L.D. Beyer

about this book: In 1919, after seven hundred years of British oppression, a slumbering rage awakened as the Irish people rose up to claim their freedom and their land. Poorly trained, vastly outnumbered and severely short on guns and ammunition, a relatively small force nonetheless brought the battle to British forces in Dublin, Limerick and Cork, and on the lonely roads and fields in between. As the fighting raged, Frank Kelleher and Kathleen Coffey—a young couple from County Limerick with plans for the future—were torn apart. This is Frank's tale: his fall from grace, his dreams, and his quest for redemption.

I wanted the cover to convey what Frank had to leave behind: his Fiancee, his country.

Family legend held that my grandfather fled Ireland with a price on his head by both the British and by the IRA. That my grandfather served in the Irish Republican Army during the War for Independence is a fact. Whether he left under an assumed name and with the British and the IRA hot on his heels is unclear. But my research paints a picture of a very tenuous time where the temporary alliance cobbled together to defeat the British crumbled easily under the weight of ancient divisions; where suspicion of disloyalty often resulted in death; and where past sins were rarely forgiven.

As many authors of historical fiction do, I took some liberties with time and place and with the events that occurred to craft my story. The villages of Kilcully Cross, Drommore and Mullins Cross exist only in the pages of this book. Most of the events depicted were based loosely on real accounts of IRA raids and battles with British Forces. But the broader context of the war and the civil unrest that followed is true, to the best of my knowledge.