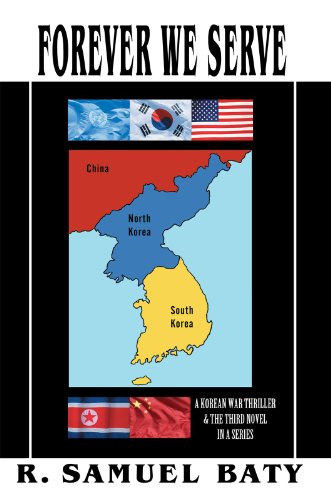 Book: Forever We Serve - A Korean War Thriller and the Third Novel in a Series by Richard Samuel Baty

about this book: Although World War II is over, the world is not a safer place. The Soviet Union has lowered an iron curtain in front of Eastern Europe, and Josef Stalin desires complete world domination. American nurse Jennifer Haraldsson and her former patient and German POW, Otto Bruner, have returned to their former lives with unfinished business. Although deeply in love, both realize the obstacles to spending their lives together are too overwhelming.

Haraldsson, who now serves as a nurse at Walter Reed Army Hospital, knows that Jack MacLaine, United States Army Intelligence Officer, is her best hope for romance. After she accepts his marriage proposal, she naively thinks her life will return to normal. Unfortunately, she has never been more wrong. After the North Koreans attack South Korea, MacLaine is sent overseas. It is not long before Haraldsson is enlisted by her boss, Dr. Brad Taylor, to travel to Korea to launch a mobile army hospital. As the two work tirelessly to set up their MASH unit, Haraldsson has no idea that an unexpected tragedy is about to strip away her newfound happiness.

Many twists and turns occur in this continuing historical thriller. The great political and military dramas of the times unfold as the legendary Marine Chesty Puller, General Douglas MacArthur, General Matthew Ridgway, and President Harry Truman assume their commanding roles.

In this continuing historical saga, an American nurse soon realizes that amidst the chaos of war, nothing is guaranteed—especially love