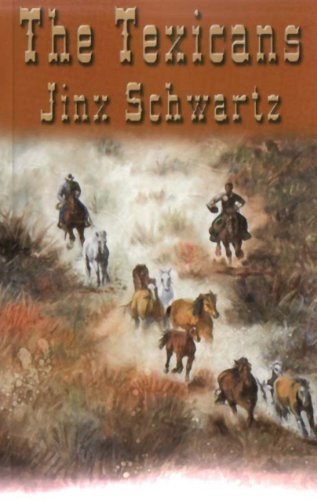 Book: The Texicans by Jinx Schwartz

about this book: The Texicans is an epic saga covering the thirty years leading to the showdown at the Alamo, and the family who lived them. My ancestors, the Stockmans, immigrated to Spanish Texas in 1806, and struggled to survive the political turmoil of the era, first under Spanish rule, then Mexican, and last, but by no means least, those interloping Americans.

I knew I was a ninth-generation Texan, which in itself is fairly rare, and I first "met" the Stockmans while on a genealogical journey, digging through tons of material dumped upon me by a cousin hell bent on recruiting me into the Daughters of the Republic of Texas. She not only succeeded, I became so interested in the family history that now I am the unofficial family historian.

It was in an over-air-conditioned Texana section of a small town library, where I was dead set on reading every Texas history book ever written, that I stumbled upon this, written about my ancestors: "…they were a congenial society for evil." Say what?

Not one to let a besmirchment lie, I determined to correct the record. Thus, The Texicans: not the normal take on how we ended up at the Alamo.

Originally published as a hard cover under Elizabeth Maul Schwartz before a publisher convinced me to use my nickname, Jinx, The Texicans was also picked up for audio by Books in Motion.

Other books by Jinx Schwartz