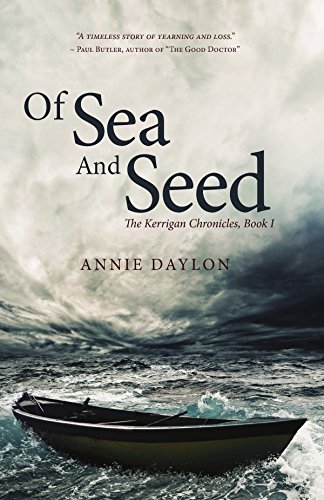 Book: Of Sea and Seed - The Kerrigan Chronicles, Book I by Annie Daylon

about this book: Of Sea and Seed, Book I of a trilogy, is set in early 20th century Newfoundland. At the helm is ghost and matriarch, Kathleen, who chronicles the lives of three generations of her family, the Kerrigans, as they struggle through tsunami, secrets, and betrayal.

The SEA in the title is a metaphor for Kathleen but the sea is also a character. The driving force behind the story is the tsunami that struck Newfoundland in 1929. It was only in the past few years, during a phone conversation with my now 95 year old father, that I learned of this tsunami which devastated the Burin peninsula. Because the telegraph poles were destroyed during the tsunami, no one knew of the tragedy for three days.

Dad told me that a little girl was on the second floor of her house when the ocean swept the house out to sea. On the returning wave, the ocean planked the house down a few hundred yards from its foundation. The little girl survived.

I started with a thirteen year old fictional girl named Kate who had survived this very tsunami. I played "what if' going back in time, before Kate's birth, until I found my main character, Kate's grandmother, my wonderful lyrical ghost Kathleen Kerrigan, a joy to write.

"I am Kathleen Kerrigan," she tells the reader, "mother to Kevin, Clara, and Jimmy, grandmother to Kate. Kathleen Kerrigan who is long dead, yet still here." In life Kathleen was a loving mother, grandmother and story teller but in the afterlife she is set adrift doomed for eternity to wander like some ancient mariner telling repeatedly, in the same order, the story of her life. "Heaven won't open its gates to a woman of my ilk," she says.

What was the deadly sin that catapulted her on an eternal journey of penance?

All Kathleen says is, "My story must be told in the proper order. The mystery of me reveals itself in time, every time."

Dear reader, If you love history (Ireland, Canada, Great Britain, and the United States), if you love lyrical language, if you love tales of the paranormal and the rhythm of the sea, if you love to curl up with a riveting suspense story, you will love OF SEA AND SEED.