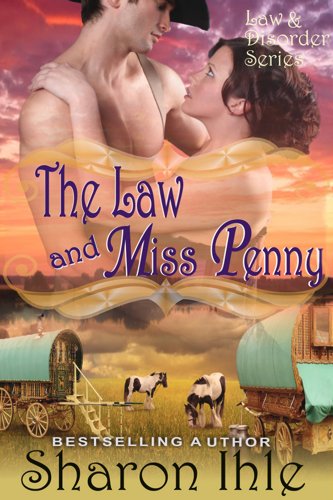 Book: The Law and Miss Penny (The Law and Disorder Series, Book 4) by Sharon Ihle

about this book: I have to say that the inspiration for this book came from something I either heard or read about when I was a teen or younger. Kickapoo Joy Juice. This 'wonder' medicine was sold in the late nineteenth century out of Medicine Wagons and by usually unscrupulous 'doctors' who were in fact, con artists. The more I thought about it, the more I wanted to write a book about medicine wagons, and in this story, my 'doctors' and the 'Indian princess" are basically honest people. The beautiful Indian Princess, Mariah Penny, is an expert at bringing a crowd to her father's medicine wagon, and Mariah herself is also an inventor of the potions the Penny family sells.

I started this book in 1888 New Mexico Territory and then moved onto various towns in Colorado. As usual, I took a road trip to the areas of most interest to me and picked up a lot of research materials along the way. As I did my research I found the perfect hero for my fake Indian Princess...United States Marshal Morgan Slater. He is on the trail of a gang of outlaws when he comes across the medicine wagon selling its wares, and he immediately tries to have what he is sure is a gang of crooks thrown out of town. When he crosses paths with them later, they are broken down in the outskirts of town. After he decides to help them fix their wagon wheel, an accident occurs, Slater is knocked unconscious, and when he awakens, he no longer knows who he is.

By then, the Penny family, already angry with the Marshal, have relieved him of his badge and identity. When they realize that he has amnesia, they decide to make him part of their act, as Brother Law. When he is informed of this, Slater can hardly believe that he is a preacher! From there the story goes to a tangled web of deceit and eventual love between Mariah and Morgan. One thing I am not particularly good at is making up titles for my books. Very rarely has an editor kept my working title, and this book was no exception. Working title? Wild Breed. It makes me laugh now!