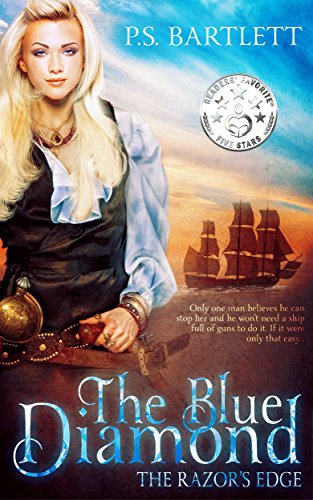 Book: The Blue Diamond - The Razor's Edge by P.S. Bartlett

about this book: Ivory Shepard is the protagonist in my newest book, The Blue Diamond – The Razor's Edge. I don't know how she found me but oh I'm so glad she did. Ivory is what I suppose I'll call, the walking wounded. She's had a life of tragedy and struggle and has gone through an evolution in only a few short years, that most people could hardly imagine in a lifetime, and yet she's come out the other side…still wounded but bandaged up by a mission to keep moving forward.

You see Ivory and her cousins came to America when they were children, with their elder great aunt and uncle and settled in a lovely manor in what was Charles Towne, South Carolina. The town was just beginning to boom and develop but they were repeatedly under attack by the Spanish as well as privateers and pirates. Unfortunately, most of the town's development took place on the peninsula, which was fortified and protected but Ivory's aunt and uncle chose to stay in their lovely manor near the Ashley River and one night, they paid dearly for that choice.

Imagine if you will, four young girls under the age of fourteen, orphaned and alone. No home, no family and only each other to lean on in order to survive. Ivory being the eldest, took on the role of provider and protector. It was a role she was born to play. Being a resourceful group, they found work as housemaids and kitchen workers in the wealthier homes in Charles Towne but that wasn't the life Ivory wanted for them. By the time they were in their late teens, they'd managed to save enough money to purchase a small farm, back over in the danger zone, away from the fortified peninsula but since the girls were already passing the age of when they'd be expected to marry and have children, they wanted to be as far from not so polite society as possible.

The last thing any of them wanted was the traditional life of a southern lady. Ivory knew the risks. She'd been leading somewhat of a double life and prepared her cousins for what may come by arming them, teaching them to fight and constantly reminding them of what they stood to lose if they didn't defend themselves. Although they were getting along well on the farm and pulling in a decent living, somehow she knew their days in Charles Towne were numbered and she was right.

You see, Ivory may have been born a pirate or the devastation she saw and went through the night of the Spanish raid flipped a switch in her, as tragedy often does, that pushed her protective instincts into overdrive. Maybe she was always destined to become a pirate? Maybe leaving Charles Towne and striking out on an adventure into a new life was their destiny? However, you can't just wake up one morning, pick up a razor and slit someone's throat who wants to slit yours. That kind of grit takes time and internal damage that no matter how well you hide it, it eventually finds its way out.

Ivory was my muse throughout this book. Finding all of the pain and strength from the pain inside of her and then looking deeper to find even more was like opening a gift every time I worked on this book. Unravelling her and finding those tender spots and that big, fat, pounding heart of hers was so satisfying that I didn't think I would ever stop. Putting a man in her path who could finally be worthy of her love was no easy task either but he had to be just the right one. Attractive enough to catch her eye but he too had to have his own demons and hidden pain. She needed to be able to understand him and not just fall over at the sight of him. He had to prove himself worthy of her attention and above all, her love.

Ivory and I became very good friends and I absolutely adore her cousins as well. They might as well be sisters because they were raised as such but each one gives her something she is missing in return for her protection, loyalty and love. Sisterhood is a beautiful thing and unless you have those symbiotic relationships with other women, it may be hard to understand. I hope every woman who reads this book sees their friends or sisters in Miranda, Cass and Keara. They are all four so different but fit together perfectly. The real truth is, I know these three women in real life. They are the virtual embodiment of my three closest female "sisters." Shhhh…don't tell them! I often describe this story as Charlie's Angels meets Pirates of the Caribbean but after catching an episode of Sex and the City recently, I'm inclined to think they more closely resemble these four ladies.

So, I suppose for a while, I was the virtual embodiment of Ivory. I wanted to be her. I climbed inside of her world and felt her pain, her passion, her vulnerability and above all her attachment to her cousins. I even felt her disappointment in the man she was falling in love with against her better judgment. The ties that bound her were more about the shackles in her own spirit than actual binds. Her nightmares were real and when taken away from her duties, she lost that part of herself for a while where she always had to maintain control but now I must stop because if I don't, I'll give too much of her away and leave you with no mystery at all.

I can't wait to meet up with Ivory again soon. I'm anxious to find out what's next for us—I mean her in the next book!

Video: The Blue Diamond - The Razor's Edge by P.S. Bartlett