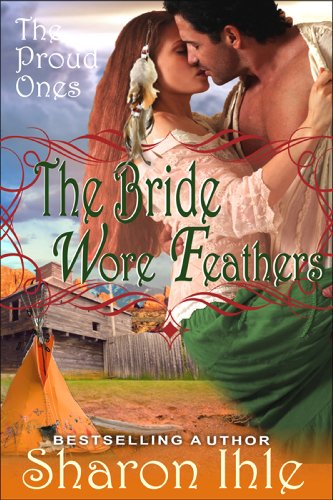 Book: The Bride Wore Feathers (The Proud Ones, Book 1) by Sharon Ihle

about this book: I got the idea for writing The Bride Wore Feathers during a visit to North Dakota. I visited a museum while there and also toured the restored facilities once used by General George Armstrong Custer and the 7th Calvary. By the time I'd finished reading about the Indians and soldiers that lead to Custer's last stand, I had visualized a fictional niece, Dominique, for the general as well as a handsome imposter, Jacob, who joined the 7th Calvary as a spy.

Jacob's family had been wiped out by a Sioux raid when he was a boy and the tribe subsequently took him in as one of their own. In his heart, Jacob felt that he was more Indian than white man, and eagerly took on the job as a spy for the Sioux. What he didn't count on was falling in love with the fiery red-haired niece of the general himself, a circumstance that put him at odds with both Dominique and the tribe that raised him.

I had a lot of fun as well as learned a lot about the history of our great country while writing this novel. It took a good six months to write the book with about another month devoted to research. My husband actually came up with the title, The Bride Wore Feathers, because he thought it went rather nicely with another of my books, The Bride Wore Spurs. I fell in love with the cover the minute I saw it simply because the characters look exactly the way I envisioned them.

This story spans the months of planning that led up to Custer's last stand, takes readers through that war, and then continues with the aftermath of the Calvary's terrible defeat. I hope that readers will feel the same way that I do about the novel--that I learned a lot about our country's history in a thoroughly entertaining and heart-warming way.

• "A must read for all who love historical, western romances."