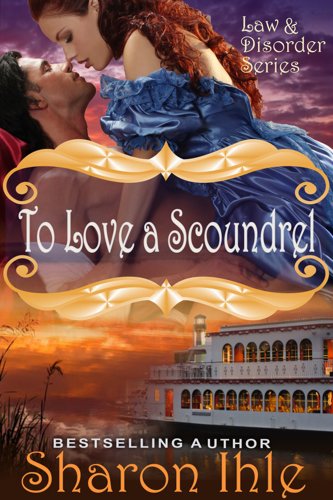 Book: To Love A Scoundrel (The Law and Disorder Series, Book 1) by Sharon Ihle

about this book: To Love a Scoundrel is about a headstrong young woman, Jewel Flannery, who is employed by Allan Pinkerton of the Pinkerton Detective Agency. While on a case, she meets Brent Conners, the handsome owner of a pleasure riverboat that provides transportation as well as entertainment as it cruises up and down the Mississippi River. When it looks as if Jewel might find her latest assignment aboard this ship, she dons one of her many disguises and signs on as an employee. It isn't long before the fireworks fly between Jewel and Brent and they discover a deep attraction to one another.

I wrote this book because I've always admired women who are willing to take on 'men's work' in the name of self-fulfillment. During the Civil War, Allan Pinkerton was one of the first men to realize that women could play a very important part in bringing the war to an end, and continued to hire women well after the war was over. I couldn't wait to come up with a woman worthy of his expectations, and think that I did so with Jewel Flannery. She is not only intelligent, but ingenious and at times, hilarious. She is also a woman with a troubled soul thanks to father issues and the fact that he was never a part of her life. Throughout the book, Jewel is always on the lookout for the father she's never met, and ultimately finds.

The main thing Jewel finds in this story is something she never expected...love. Brent Conners is a southern gentleman through and through, a man with a large family and an even larger heart. Although he doesn't trust her at first---after all, the woman presents herself in several different disguises--he's smitten enough to find out the true woman beneath all the costumes.

Writing To Love a Scoundrel took around six months with a whole lot of research before and during the writing process. I'm a real stickler for historical detail and worked very hard to make sure everything in this book is germane to 1876, the year it is set. 1876 is probably my favorite year to write about. So much happened then--Custer's defeat in June, the crux of my novel, The Bride Wore Feathers; the death of Wild Bill Hickok in August, the root of another novel, Wildcat; and lots of interesting events for a wild west buff like myself.

As for the cover of the novel, I think the models are perfect examples of Brent and Jewel, right down to her gorgeous auburn hair and his thick head of wavy sable hair. I was also happy to see the riverboat incorporated into the cover as it plays a big role in this story. For me as a reader, I'm always more drawn into a story when the characters on the cover resemble the people I'm reading about. I hope readers of To Love a Scoundrel will feel the same way. Here are a couple of thoughts from readers who have read the novel:

• "Great read! Very entertaining from beginning to the funny ending."

• "If you love a romance in an old west setting this is your book. I started this book and couldn't put it down."