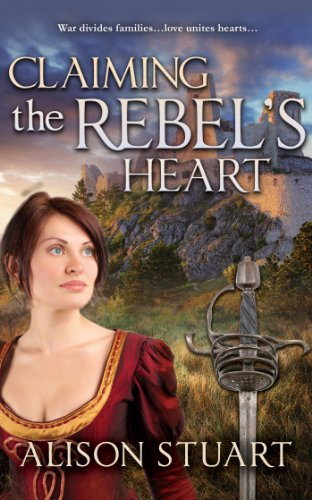 about this book: When it comes to "historical romance", it seems today that only two periods of history exist - regency and Scottish highlands. I like to take my readers into another period of history - the English Civil War (roughly the period from 1642-1660). Think 'cavaliers' and 'roundheads', a King executed, ten years of republican rule in England and a civil war. I have harboured a passion for this turbulent period of history since childhood and as a writer it provides a trove of background stories around which to weave my own tales of love and loss.

Civil War is the most brutal of wars - brother against brother, friends pitted against each other on the battlefield and fathers against son. Women were left to tend hearth and home and in the case of many women, to actually defend hearth and home against forces headed by men who had once been their neighbours and friends. The amazing courage of women like Brilliana Harley and the Countess of Derby were the inspiration for my heroine, Deliverance Felton.

In Claiming the Rebel's Heart we meet Captain Luke Collyer who has been ordered by Sir John Felton to garrison and defend his castle of Kinton Lacey against the local royalist force. Luke knows he will be up against a formidable force. He had not reckoned on that force being Sir John's eldest daughter, Deliverance.

Deliverance has a fierce loyalty to her family and her home and believes that she alone can keep them all safe, despite the superior royalist army at her front door. No shrinking violet, Deliverance can shoot and wield a sword and has read up on everything she needs to know about siege warfare.

It will take all Luke Collyer's experience and cunning to defeat the besiegers and to do that they must learn to trust each other.

As betrayal surfaces and threatens all that Deliverance holds dear to her heart, how are they to uncover the spy and deadly force within their midst before it's too late?

I haven't read many Commonwealth (17th century) stories, but I really liked this one. With two very different sisters, a traitor, Commonwealth forces against King's Men, a castle in siege and divided loyalties, this made for a very good read. Both main characters were flawed yet likable; the secondary characters complemented the story, adding without overly intruding. I also liked that the heroine's father was swayed by worldly considerations despite his beliefs. The heroine's sister loved a King's man whose brother was less than stable, which gave everyone divided loyalties again. A well-constructed story with a very good knowledge of the times, I really enjoyed Claiming the Rebel's Heart and will definitely read it again. [by Lisa Chaplin]