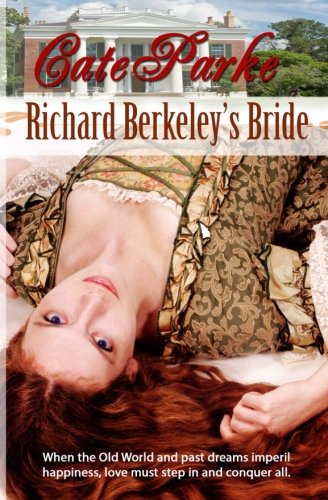 about this book: The girl Richard Berkeley met at Alexandra at grandfather's home of Inveraray Castle that summer over a year earlier. She had been not only the most beautiful girl he had ever seen, she was carefree, happy and warm—in short, everything he'd ever wished for in a prospective wife. He suspected Lord Edward's promise to bequeath him his land, wealth and the empire he'd amassed in the New World wasn't the true treasure—it was this girl, Lady Alexandra Campbell.

Imagine the confusion he felt when he next saw her on the pier the day she finally returned home to Charlestowne of the South Carolina Colony. Her face and voice bore nothing but coldness toward her father, as though she were determined to punish him for some imagined crime. He couldn't imagine what catastrophe had wrought the difference between the girl he'd first met and the girl he saw standing alone on her father's ship that blustery December day. He couldn't imagine—but he was determined to get to the bottom of the mystery. He was imminently suited for the task…and he knew it. He hadn't trained as a barrister for nothing.

I hope you'll join me for (as they say) the rest of the story. It's a tale readers of the England's Georgian period will enjoy. Anyone who loves stories about America's colonial period and the Revolutionary War will enjoy the story.

My publisher is the one who actually came up with the cover. I couldn't believe she would ever find a cover model who so perfectly portrayed my heroine. The house shown on the cover also bears a striking similarity to the one I describe in the book.

I've done masses of research for my book. When I began writing I'd have to stop frequently and look up information. Getting it right provides the touches that make the book come alive for the reader--especially those who live or have lived in the places mentioned. Anyone familiar with research knows it means digging for information, often in obscure places.

While digging for information about the Revolutionary War I had a single burning question. How could a country that really wasn't a nation yet fight and win a war against what had been the world's greatest army and navy? An interesting fact that most readers aren't aware of is that the American Revolutionary War wasn't won in the northern colonies. Quite the opposite. It was won in the south. What was the turning point, though? What was the single precipitating factor? While digging through one history book I read a single paragraph and realized I had the answer. A loud plea for help had gone out from South Carolina to men who lived on the frontier beyond the mountains to lend their assistance to their effort to expel the British. A British officer, Major Patrick Ferguson, sent those same men a message: his words, essentially, were if you do not stop your opposition to the British, I will march my army over the mountains, hang your leaders and lay the country waste with fire and sword. Rather than cowing the frontiersmen, he fanned the flames of their fury. They sent out a muster that resulted in three hundred men who marched from what was called Fort Watauga, in what is now northeast Tennessee, and marched across the Appalachian mountains to Kings Mountain, in what is now South Carolina, where Major Ferguson and his men were encamped. On Saturday, October 7th, a little after noon, what were known as the Overmountain Men arrived at Kings Mountain and surrounded the mountain. The battle began a little after three p.m. In one hour and ten minutes (someone actually used his pocket watch to keep track) every single man on the mountain had either been killed or captured by the Overmountain Men and the men they'd drawn along with them along the way.

It was a momentous victory, made more so by the fact that that news sped to General Washington in New York long before the days of instant communication. It invigorated the nation and made them understand that the British weren't invincible. Armies were sent south. Remember the movie, The Patriot? It was a movie that highlighted a composite of two of those battles, one of which, The Battle of Cowpens, was widely recognized (an acknowledged by General Lord Cornwallis) as a resounding victory for the Americans.

See what I mean? Historical research is compelling stuff!

I would like my readers to know that I'm hoping you enjoy Richard Berkeley's Bride as much as I enjoyed writing it for you. It has truly been a labor of love.