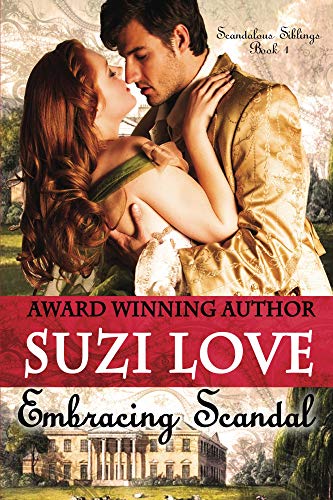 about this book: Embracing Scandal is an historical romance and the first in my scandal series with heroines whose scientific knowledge and intellect are an affront to increasingly prudish early Victorian society.

Five siblings battle against the strictures of British society to succeed in their chosen scientific fields. This story is about Lady Rebecca Jamison, Becca, the oldest in the family and how she and Cayle, the Duke of Sherwyn, embrace scandal as they battle to defeat an unscrupulous investment consortium.

In this book, Lady Rebecca Jamison saves her family from financial ruin by secretly investing in England's railway boom. But when a greedy investment syndicate discovers they are being outwitted by a woman, they threaten Becca and her family. Desperate to stop her peers before they rob more innocent investors of their life savings, Becca has no choice but to visit Cayle and ask for his help. He was her best friend but is now newly returned to London to take up the title of the Duke of Sherwyn after his father's death.

But Cayle worries that once the syndicate is defeated, he won't have an excuse for being in such close contact with Becca and that her independent nature may make her refuse to continue their relationship and refuse to become his duchess.

Other books by Suzi Love