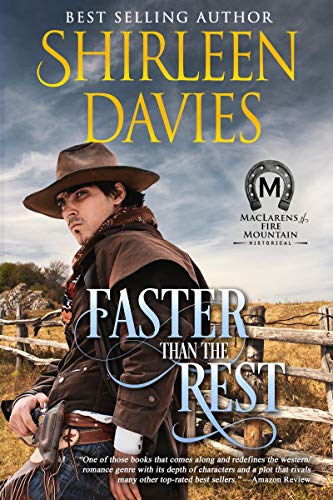 about this book: Jamie MacLaren, second oldest of four brothers, has become a stranger to his family. A man apart, rebuilding his life after the woman he loved jilts him for a wealthy stranger. Leaving Fire Mountain behind, he moves across the southwest, first as a hired gun then as a U.S. Marshal, becoming the best at rescuing kidnapped victims.

Victoria left Jamie years before but never forgot or stopped loving the handsome young cowboy. She's endured her disastrous marriage but now must find a way to survive being kidnapped by a group of vile outlaws after her husband refused their ransom demands. Victoria's escape from the murderous group plunges her into a cold desert night and right into the path of her rescuer—Jamie MacLaren.

The strong attraction has survived, but doubts, distrust, and the true motivation behind Victoria's disappearance remain a mystery. Jamie knows Victoria has the ability to betray, but is determined to sort through accusations and fact to understand the secrets of the past years and the real reason she left him behind. His still-bruised heart tells him to stay far away, but the pull between them may present too much temptation for a love that won't die.