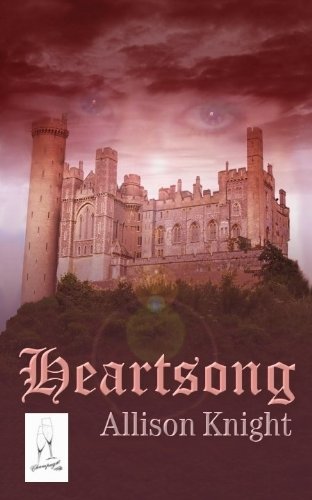 about this book: I actually started this book while I was driving to a writing class I was teaching. Listening to my classical music station on the way to schook, I heard the chorus from the last scene of the last act of the Opera Faust, which is beautiful and ends the opera. Suddenly out of nowhere, a scene appeared. A medieval woman was kneeling in front of a knight, the front of her gown wet, her eyes were brimming with tears as she pleaded for him to return her baby. Stunned, I drove into the rest area I was passing and gulped a few times. After I'd calmed down a bit, I drove on to school, knowing I had to figure out what had happened to that woman, who the knight was and why she was ready to sob her heart out.

At school, during the coffee break, I sketched some scenes and slowly the story began to arrive and Heartsong was born. After a lot of research, because I never thought about writing a medieval, and a hundred rewrites, I had a good story. This book won the Novel of the Year in 2008. I also discovered I couldn't let the characters go. Heartsong became the first of a series. If you enjoy medieval romance with battles, knights, personal betrayal, you might just enjoy "Heartsong", the first of the 'song' books. Each book is a stand only book, and does not depend on any of the other books in the series.