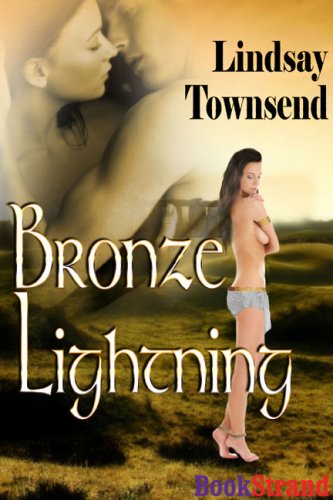 about this book: 'Bronze Lightning' is a historical romance set in ancient Britain - the Britain of Avebury and Stonehenge. It's a coming of age novel for my heroine Sarmatia and my hero Fearn, the story of a beautiful and determined young woman's epic journey across Bronze Age Europe and her struggle for acceptance in an island country far from her Mediterranean home.

No other novel crosses like this between the glittering world of the Mediterranean and the dark mysteries of early northern Europe. See Avebury and Stonehenge through the eyes of a Kretan bull-leaper. Experience Egypt as it was under the Pharaohs.

In 'Bronze Lightning' Sarmatia, renowned for her uncanny understanding of animals, is a trainer for the Bull Rite, the dangerous, glamorous ceremony that gives a young Kretan entry into adulthood. Fearn is a healer from the distant northern Isle of Stones - modern Britain - summoned for his skills to the sickbed of Minos, the Kretan king. They meet on the dusty flagstones of the palace courtyard and both save a life: he the life of the king, she the son of Ramose, an Egyptian guest.

Time passes. They are betrothed, but Fearn has returned home and is chosen king of his small northern country, Amathia, after the death of his predecessor, Waroch. As king, master of storms and bringer of prosperity, he cannot return to Krete. Fearn writes to Sarmatia releasing her from her vows - but is this what they really want?

'Bronze Lightning' shows Sarmatia's epic journey to join Fearn, Fearn's own trials as king and his struggles to be with Sarmatia, and the challenges the two face together when they are reunited.

Review from Red Roses for Authors.

• "This is a remarkable book in that it takes you back in time. It is well written so that you get a glimpse of the world at that time and it gives you a wonderful mystery as to who is behind the attacks and keeps you guessing as to what will happen next. The many twists and turns keeps you engrossed as you try to figure out who is behind all the mishaps that keep happening."