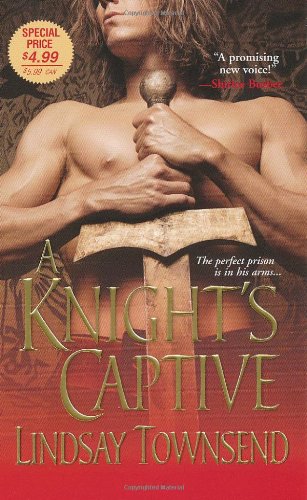 about this book: 'A Knight's Captive' opens in late summer 1066, in the north of England. That year, Halley's comet was seen in the skies as a precursor of doom and destruction and England was invaded several times. Before William of Normandy's famous victory at Hastings, King Harold of England fought a great battle at Stamford Bridge in Yorkshire against King Harald Hardrada of Norway and won.

In 'A Knight's Captive' I wanted to include this battle, or at least the end of it. I also wanted my story to have a northern flavour and feature both Anglo-Saxon London and regions outside London. I also made my hero and heroine a little different. My Norman knight is Breton and Marc has dependants, three nieces, whom he must care for. Sunniva, my heroine, has an unusual skill with knives.

I brought these two together on a pilgrimage. It is on that holy journey that they hear of the battle at Stamford Bridge and realise that they are now 'enemies'.

But Marc has fallen in love with Sunniva and she with him.

He claims Sunniva as his captive - but who, in the end, is capturing who?