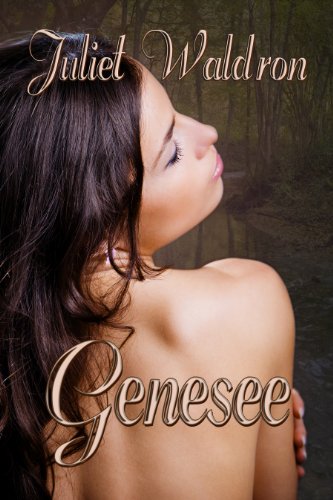 about this book: Genesee was what I've come to call a "near miss book." I had several publishers of the big time sort look seriously at her, only to be shot down in committee. This kind of experience led me, back in the early years of this century, to go to e-publishers who were more willing to look at novels in the cross-genre mold.

Genesee is about a girl with an interracial background, only she's an 18th Century girl, and her parents are Iroquois and Dutch, respectively, and her birth results from a seduction/adduction, in which the younger partner, a teen girl, follows a fantasy into real world of trouble. Genesee is born near the New York river of the same name, the "beautiful valley," and as a baby, she too is abducted, this time by her white uncle, who has come, too late, into the wilderness to recover his sister.

Raised as a proper colonial girl, between frontier New York and "civilized" Albany, her dark skin and hair mark her as different from her cousins. As she reaches marriageable age, she feels out of place almost everywhere. She's neither Iroquois nor White, and it seems that neither side much want her. In Albany, a handsome, bright immigrant from the West Indies falls in love with her, but he's penniless and cannot immediately marry her. When the American Revolution begins, Genesee is caught in the middle of a bloody, violent civil war, waged between neighbors both white and red. Old friends become enemies as terror, murder and arson begin.

I grew up in upstate New York with the history of the place all around. We lived in a house built in the 1780's, just after the Revolution, legendarily once attacked by Iroquois. Not that we blamed those old-timers--they had, after all, just been dispossessed by American settlers. Learning early about the American Revolution, about the first European immigrants to New York, and even about my own family history, all played into the desire to write a story like Genesee.