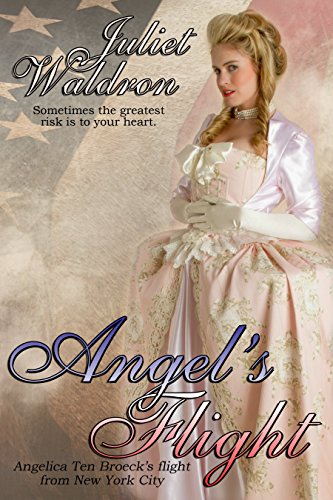 about this book: "Angel's Flight" is a romance set during the American Revolution in the Hudson Valley. I'm of Dutch ancestry and have always loved the stories "Rip Van Winkle" and "The Headless Horseman" because they were about the Dutch settlers who came so early to America. There are so many romances about the Scots/Irish and English, but none about the Dutch, who kept quite different attitudes and traditions, even at this late date, so I thought I'd write one.

Angelica is a patriotic Dutch heiress who finds herself in New York City when the British capture it. A redcoat officer begins to stalk her, for he would like to own her property--and her lovely self. The mysterious soldier who helps her escape is not exactly the disinterested party he claims to be, but he proves to be as brave and as wily as "George the Fox" Washington. On their journey up the Hudson to Albany, Angelica expects to encounter brigands, renegade soldiers, opposing armies and Indians, but the greater danger, she discovers, is to her independent heart.

There are many primary and secondary sources about the American Revolution in New York State. Back in the early 90's, I read every one which inter-library loan could supply. I've written a few true historical novels set in this period/place and so felt pretty grounded in the subject.