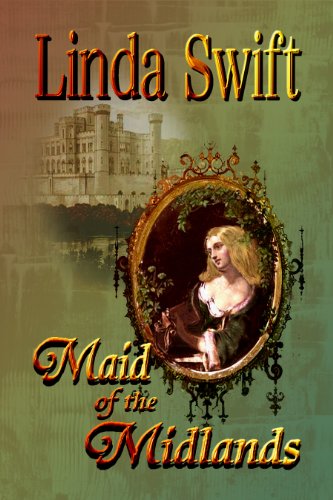 Book: Maid of the Midlands by Linda Swift

about this book: My husband and I lived in England for a time during his work assignment and while there, we spent every available weekend on National Holiday Tours. I lost count of the number of castles, great halls, manor houses, minsters, and abbeys we visited but each one remains a vivid memory. I was amazed at how many had notations that Mary Queen of Scots had stayed there during the time she was a "guest" in England. This was the proper way of saying that she was a prisoner for nineteen years where she had sought refuge from persecution in her own country. I won't attempt to debate the political aspects of the situation but I felt empathy for her solitary life being moved from castle to castle. I was also saddened by her misguided hope that she would one day be received by her cousin Elizabeth I, reigning Queen of England.

When we visited Holyrood Palace in Edinburgh, we saw Mary's room and the bed where she had slept. It was unguarded and covered with a faded gold spread, accessible to anyone who should be inclined to sit or lie on it. In another room a bed was totally enclosed in a glass case because of its tapestry cover and curtains. That spoke volumes to me about the lack of esteem in which Mary was held.

Later, we visited the site of Fotheringhay Castle, Mary's final place of incarceration and death. Fifty years after she was beheaded there, the castle was completely demolished. Expecting to see a solemn monument to this event, I was disappointed to see only a forsaken hill with a small sign to indicate what once had stood on the site. And the more I thought, the more I knew I had to write a book in which Mary played a role. I mentioned my fascination with Mary to a few of my English friends and their reaction further confirmed my observation that the misguided Queen of Scotland would never win a popularity contest here.

After we returned to the US, an English family visited us. I had stated my intention to write about Mary and they gifted me with a seven hundred page well-researched biography that told me everything I needed to know about Mary Queen of Scots from her birth to death. I hadn't meant for her to have a major role in the book. The plot revolved around Matilda, a winsome lady-in-waiting and Jondalar, a stalwart castle guard. But after reading this biographical tome, I felt I knew Mary well enough to give her words. It soon became difficult to keep her from taking control of my story. Queens are apparently used to dominating their domains. I didn't re-write history although at one point, I really wanted to. And I am satisfied that the words Mary spoke were her own simply recorded by me.

• "Maid of the Midlands is a well plotted historical with interesting twists and turns. Linda Swift creates a convincing story which makes the reader believe it must all be true. This is a must read for history buffs and romantics alike." — Two Lips Reviews - Mac

• "Maid of the Midlands is written in Linda Swift's patented style of what I call "classic." She adds no outrageous adjectives, but writes in a way that tells a wonderful story with emotion and flair without being showy." — Rising Star Reviews

• "Maid of the Midlands is a lovely historical romance, rich in history and filled with an amazing array of characters. Linda Swift pulls us into the story with Maid of the Midlands and keeps us there until we find out how brave young Matilda resolves the issue." — D. Guyette