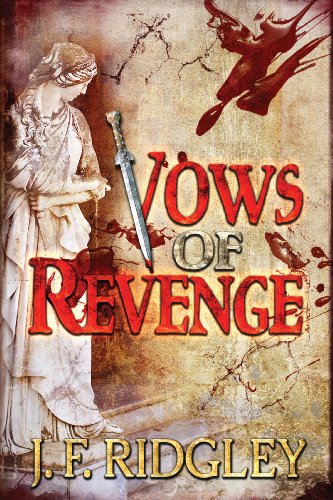 about this book: Can you imagine being allowed to execute your wife for disobedience but are forbidden by law to sell her into slavery? What hell that woman would have gone through. Well, that was exactly what caught my attention. In Ancient Rome 295BC this was an actual Roman law. Thus VOWS OF REVENGE came to be.

If you like historicals, romance, godfathers, pirates and forbidden love, you will love this story. Vows of revenge are made when Lucianus-a plebe, is kicked off his land by a patrician who vows revenge against Lucianus for stealing Aelia from him, which he didn't. However, he does heal her with his heart. All end up in Roman's court. Will Lucianus grovel at the foot of Rome's power? Not likely.

I can never get enough of researching what goes on during this ancient time, even the legal system, which was the most difficult to learn or follow or understand and is as tricky as our court system today.

Ancient Rome totally amazes me, especially when it clashes with the Celts, another period I have to devour.In fact, a lot of things during the Roman Empire match today. I believe times change but people don't. And that's okay with me. Makes for great stories that I can identify with and I hope you do as well.

If you will look closely at Aelia standing brave and tall on the cover of Vows of Revenge, she is wearing a set of jewelry that you can win in a future drawing to be announced on my newsletter. Be sure to sign up for this future giveaway and more at my website. I look forward to hearing from you.