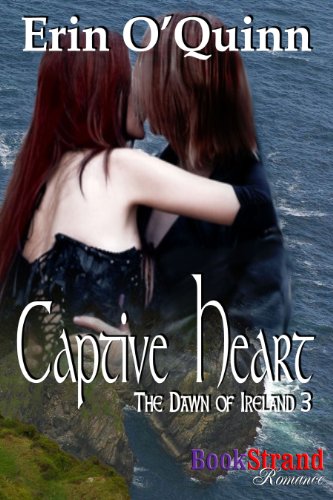 Book: Captive Heart (The Dawn of Ireland 3) by Erin O'Quinn

about this book: [log line:] Bound to the fevered heart of her own kinsman, where can she escape?


The third part of O'Quinn's Dawn of Ireland series tells the story of a beautiful young woman who reaches out to help a group of women held captive on perilous Tory Island...all the while she is herself captive to the infatuation of her husband's cousin.

Caylith is young, beautiful, adventure-minded . . . and naive. She allows her husband Liam's cousin Murdoch to become way too close. Before she can easily pull away, she finds herself bound to his pledge to find the captive women. She hardly dares ask herself what he will demand in return.

Caylith and Liam organize a rescue party to travel north, to the windswept and dangerous island of Tory off the shore of (now) Donegal, Ireland. That is where more than a dozen women are held as slaves to despicable freebooters. The man behind the slave-holding is one who attends their own church in Derry.

Caylith must find the women, rescue them, and then find and punish the man responsible for taking and selling them. And finally, she must confront her own relative--the one who loves her with a fierceness of possession that breaks Liam's heart, and hers as well.

This book leads in to the novel FIRE & SILK, although none of the single books in the trilogy nor F&S need to be read to enjoy any one of the others.