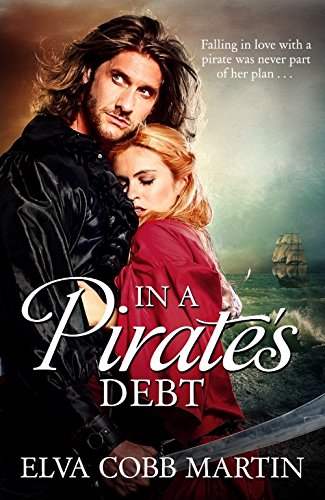 Book: In a Pirate's Debt - Falling in love with a pirate was never part of her plan by Elva Cobb Martin

about this book: When writing my first novel, Summer of Deception, I decided to give that hero, Luke Barrett, a pirate ancestor in Charles Town in the early 1700's. So In a Pirate's Debt is a prequel to Summer of Deception. In Summer of Deception I placed a life-size portrait of Captain Lucas Bloodstone Barrett in the attic that the heroine finds. This was my clue to the prequel coming soon.

In a Pirate's Debt is about a young heroine, Travay Allston, who is confronted with a forced marriage at her stepfather's Jamaican plantation. She flees and ends up driving her horse over a cliff into the Caribbean Sea to escape Sir Roger Poole.

Captain Lucas Bloodstone Barrett sees her deadly jump and rescues her from the sea. Having lost her parents to pirates, Travay, who suffers from amnesia as the ship travels to Charles Town, has nothing but scorn for her rescuer when she regains her memory. She's determined not to be in a pirate's debt, even for saving her life.

Lucas happily drops her off in Charles Town and washes his hands of her. He thinks.

But this is just the beginning the story and the romance. Sir Roger Poole shows up in the colony as a new council member and comes after Travay again. He plays his ace card by having Lucas jailed and given a death sentence for pirating. Will Travay pay her debt to a pirate by marrying Roger for the promise of Captain Bloodstone's release?

If you like swashbuckling romance and adventure on the high seas, you will enjoy this novel.