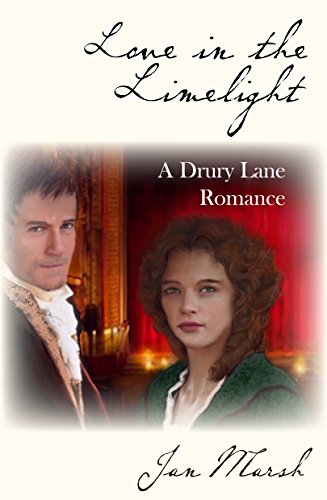 Book: Love in the Limelight - A Drury Lane Romance by Jan Marsh

about this book: I wrote this novel, a historical romance set in England in the 1770s in Drury Lane theatre, after researching material for two study guides on the plays of Richard Brinsley Sheridan, the most influential playwright of the time. It was a period where there were huge changes going on in the world of the theatre and I was particularly interested in the role of women on stage, so I used these special interests to plot a novel about the pressures and challenges of being an actress at this time.

This period in English history is pre-Regency, but knowing the popularity of Regency romances, both in the US and the UK, I have given it many of the ingredients of a romance in that genre. I hope that those who enjoy such novels will look on this book as something with a little more substance and subtlety than the standard bodice ripper.

The original final title was 'The Play's the Thing' from Hamlet, but that title was given to a recently published book set in Shakespeare's theatre so I had to ditch it, substituting a suitably theatrical one.

This book is a departure for me. I haven't ventured into writing historical before, focusing previously on contemporary life. But I love the period, probably spending too much time on the research, and might be tempted into the eighteenth century again.

So, read and enjoy! And review!