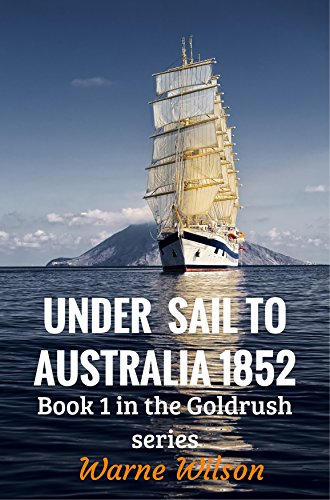 Book: Under sail to Australia 1852 - Book 1 in the Goldrush Series by Warne Wilson

about this book: To complement my book-length novel ESCAPE FROM INJUSTICE, (455 pages) I have rewritten it into a five-book Indie series, with different titles and cover images, connected by the subtitle "Number # In the Goldrush Series".

This book is the first of these; UNDER SAIL TO AUSTRALIA, with the subtitle; Book 1 in The Goldrush Series; its length of 79 pages will make it easier to read as an eBook in a series. Book 1 concludes with the Lady Beverley docking in Melbourne town, Australia, and Book 2 in the series will continue with the characters finding work, borrowing money and investing in property during a boom fuelled by gold.

The theme of these books springs from an old legend passed down in my family about a young man in the 19th century, charged with murder after a schoolyard fight and sent out to Australia to escape hanging at the time of the great Australian Goldrush.

I started writing the story for my family with an intent to find this man by research, and I did, too, but it soon became obvious, there were so many gaps, that my imagination had to win; I pursued him in my writing as his, and his love's, and his friends' characters became real, and unbreakable bonds, forged during good times and adversities of life and death, intensified between them.

At first, I became absorbed in the legend, as I imagined John Lille being taken into custody by the good-natured, bumbling village policeman and his motherly wife, I easily described the police house as I remembered my grandmother's little weatherboard cottage, built in Ballarat during the gold rush. John escapes to join the clipper ship Lady Beverley, and experiences dramatic events during the long, dangerous voyage to Australia. He meets headstrong Irish girl Bernadette Ryan, who with two crew members and three passengers, become partners in a gold mine at Ballarat, a major diggings in the Australian Rush; and later the wealth and affluence generated by heavy industry associated with deep rock mining. I was born in Ballarat, and my life has never been far from the history and stories of the diggings. In the Boy Scouts we jumped across shafts, and once we lowered each other down on ropes and explored an underground drive in the white clay to find a candle in a wire spike in the wall and some rusted artifacts left there by the miners 100 years before. I later worked with men whose parents and grandparents had worked in the mines, and I listened with interest to their stories, in fact, the first block of land I sold as a trainee salesman in Ballarat caved in three weeks later when an old mine shaft opened in the middle of it, capped a hundred years before with logs and earth, it went down.

As the years passed, the enormity of the challenge to write and develop the characters became an enjoyable pursuit, I was determined to do justice to the story. I was able to bring it to a close at 220,000 words, and then the work of editing began.

If you decide to read Under Sail to Australia, I hope it grabs you as it did me, and if you could leave an honest review I would be very interested to gain your thoughts.