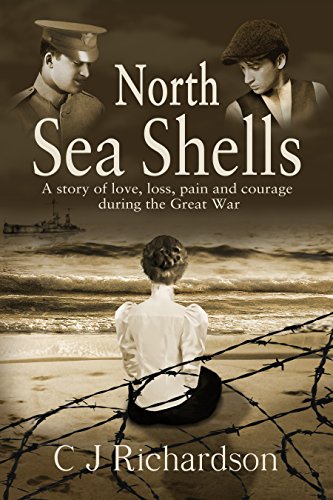 about this book: The book is set in the North East coastal town of Hartlepool in England during World War One. The town was bombarded by three German warships in December 1914. It tells the story of a young woman, Martha and her husband, George who volunteers after the bombardment along with almost all the men of the town. The outrage of the British people, over the bombing, which gave rise to the highest number of volunteers for the armed services than at any other time during the war. George's brother, Albert, has a leg injury from working in the shipyards that prevents him from volunteering and his interest in Martha is more than a brotherly affection. George sends regular letters home from the front that provide an insight into the dreadful conditions on the western front.

It will give readers a clear insight into Edwardian social history, what life was like for the families left behind while their husbands and sons were fighting for their country, what their daily life consisted of, what they did to help the war effort.

I decided to write the story after hearing about it on a local news programme in 2014 while studying at the Open University. I hadn't any idea that it had happened until that day.

So far, my primary readers have been women, and I think the romantic elements are the main reason for that.

The book took over two years to write with at least half of that spent on editing and rewrites.

The title took a reasonable amount of time. I wanted to have something that had a double meaning.

The cover took a long time as my chosen cover artist was American and some of my requests were misunderstood because of the language gap. I had a clear 'sepia' picture in my mind of Martha sitting on a beach, looking out to sea, with the two men in her life looking down on her. The biggest problem was the uniform and the way working men and women dressed in England. An English 'waistcoat' turned out to be a 'suit vest' in America and 'Leg o' Mutton sleeves on the woman's blouse were virtually impossible to get across. Eventually, the penny dropped, and I used photographs to get the message across.

The hardest part of writing the book was making sure the reader could actually see each character's personality and believe in them. I wanted them to appear plausible, warts and all.

The amount of research required was enormous. I made several visits to the town, visiting the battery, museums and library. I bought books written about the actual day of the bombardment and what happened. Researched several web sites. I visited the open-air museum of Beamish which has real houses, streets and shops from the period and the actors who worked in them were extremely helpful. I managed to find an actual street map of Hartlepool from 1914 which was unbelievably useful for placing my characters and their places of work.

This is my debut novel, and it has taught me that an enormous amount of research is required for a story to make it believable even though around 90% of what I learned was not included. Research is essential, but a story doesn't want to look like a history lesson.

I want to give my readers a window into the past while telling the story of a young married mother who has to find her own feet for the first time in her life. She is slightly naive and has to learn that not everyone can be trusted and that there comes a time when you have to stand up for what you believe in.