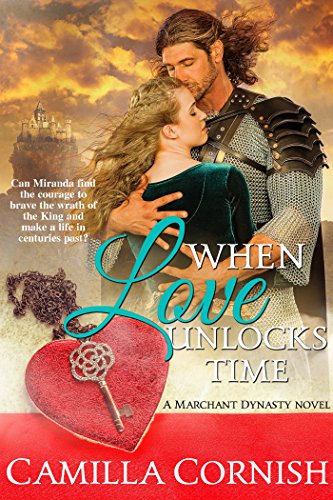 about this book: I've always loved the movie 'Sliding Doors' and it's that sort of feeling that inspired me to write When Love Unlocks Time. What if you had the chance to take your life in a different direction? Would you have the courage to risk it or would you stay safe and carry on complaining that life didn't really work out for you?

Miranda get's that chance, but stepping back in time brings danger as well as passion which is a great story to tell. Like many other people the Tudors fascinate me of course, but I sometimes just don't buy the traditional tales about them. Henry VIII was a superb military strategist and map maker, what he and Cromwell achieved in mapping Britain's coastline was a work of immense importance in the defence of the realm, this is a face of Henry that is not often seen except by serious historians.

Mary Boleyn is another one, why does everyone portray her as a sweet little thing who got caught up in it all? I see her very differently, she must have been a superbly machiavellian character to have got away with her life when both her brother and sister ended up on the scaffold. Milksop Mary is a mask, I don't see it that way.

I think that When Love Unlocks Time will appeal to people who love any sort of 'living a different life' type of novel, e.g. time travel; walking away from the train crash and disappearing; taking on a new identity, getting the chance to make a fresh start. It will also appeal to those who love a good old historical romp with a fair few spicy scenes! Although it doesn't seem to be too politically correct, the truth is that Miranda develops from a bit of a walkover to someone who realises that wealth brings power and is very happy to join the Marchant dynasty in the ruthless pursuit of it, she's a lady who looks after herself.

It took me about 6 months to actually write When Love Unlocks Time but it had been brewing in my mind for a year or two before. I became really ill and when I (mostly) recovered I really understood that life is short and I'd better get on with it. I stepped down from my corporate role where I was working ridiculous hours and decided to put my writing right at the heart of my life and most importantly, my time. I couldn't be happier.

My 'working title' for the book was 'the wrath of the king' and then 'love across the ages' but as time went on, 'When Love Unlocks Time' settled into my mind as the right one. The key was such an integral part of the story that I knew the cover would feature it, I must have looked at hundreds of photographs of keys but I knew it when I saw it!

I have been researching this book all my life really, anything to do with the Tudors has always fascinated me, books, movies, music and serious historical publications have added to my knowledge. For my British readers, there was once a Blue Peter episode that showed that a nutmeg could buy you a magnificent house in Tudor times! This made an enormous impact on me and may actually have been where the seed for this book was sown all those years ago. For non British reader, 'Blue Peter' is a children's TV programme.

I learned to stop rushing things while I was writing this book, I got better results with rests between writing, I know that's not the same for everyone but a little 'marinating' of ideas did wonders for me.

The hardest thing was actually deciding to publish! Right up until that point no-one could say a word good or bad about the world I had created. It was very difficult to send Miranda, Betsy, Lord Benedict and even my version of Henry VIII out into the world to fend for themselves.

I hope you enjoy this book and forget your own 9-5 for a bit while you read it, for us readers it's our way of being in the world and it's a genuine pleasure to be just a little part of it.

I am working on the next Marchant Dynasty novel now, I have an idea that's going to be a mix of wealth, power and controversy - a touch of the dystopian but I believe it's coming and The Marchants will be right at the forefront of it!