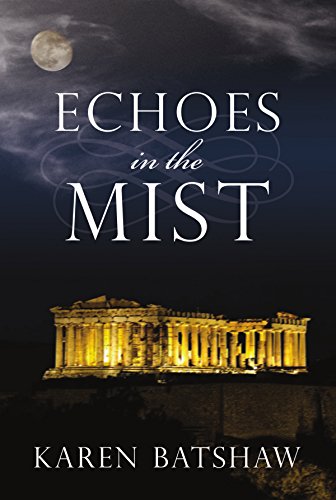 Book: Echoes in the Mist by Karen Batshaw

about this book: Echoes in the Mist is a book of historical romantic suspense that takes place in 19th century Greece. It is filled with intrigue, surprising twists and turns, and steamy sex scenes. The readers will learn about the culture of 19th century Greece. The two main characters - Julia a young American woman who longs to be an archaeologist and Stephano a wealthy merchant who also is a member of the Greece underground, fall in love and must contend with their cross cultural differences between the role of a man and a woman. In addition, they are haunted by a previous life time when Stephano abandoned Julia.

I fell in love with Greece many years ago and I taken several trips there. I did a considerable amount of research of 19th century Greece and archaeology. I participated in archaeology as a college student and was able to bring my knowledge into this story which describes the ripping of the Elgin Marbles from the Parthenon. It took over a year to write and re write and re write this story. I believe the cover which shows the Parthenon at night time is the essence of the story. The Acropolis is the essence of the Greek people, and Alexander and Julia make passionate love for the first time on that sacred hill in the moonlight.

Many people know very little about the history of Greece in the 19th century, the plundering of the ruins by Europeans, and the role of women archaeologists at the time.