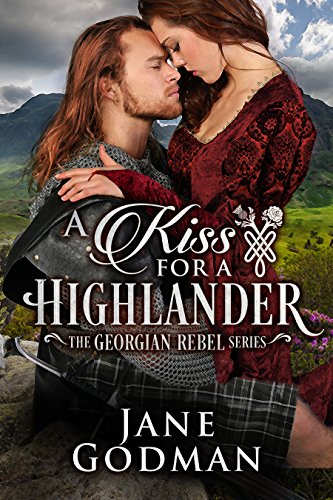 Book: A Kiss for a Highlander (The Georgian Rebel Series) by Jane Godman

about this book: The Georgian Rebel Series

Who can resist a rebellious highlander, a romantic Jacobite lord, a dare-devil highwayman or a swashbuckling corsair? These are the heroes of my Georgian Rebel Series, the men who fight hard for the cause they believe in, and harder for the women they love.

The Georgian era is that period of British history spanning the reigns of the first four Hanoverian kings. They were George I, George II, George III and George IV (who was the Prince Regent prior to ascending the throne). The Georgian period started in 1714 and ended in 1830. We are used to reading books set in the latter part of this period, the Regency, but I find myself drawn to the earlier time. Don't get me wrong, I love Regency Romances and Georgette Heyer is my favourite author. It's just that, by the time of the Regency, manners were becoming more formal, almost as a preparation for the Victorian period that was to follow. I love the wildness of the earlier Georgian time, when men were more daring and the unexpected seemed to be around every corner. Seriously, who can resist a man in a cloak and a powdered wig?

The stories in The Georgian Rebel Series begin in 1745, when highlander, Fraser Lachlan, and his best friend, Jack Lindsey, are left behind in England after the disastrous attempt by Bonnie Prince Charlie to invade England. Fraser's story, A Kiss for a Highlander, is the first in the series.

Reviews for A Kiss for a Highlander

• 'I would recommend this novel to anyone who is looking for a love story that builds over time between two unlikely people willing to risk it all for each other.'

• 'What an absolute marvelous read from begging to end. Truly this is a must read for all of you who enjoy reading Scottish romances. This story covers everything, love, betrayal, heartache, hope, redemption and most of all, a wonderful HEA.'

• 'Readers will enjoy the deep characterization and the stormy passion of this romantic couple, and will look forward to the next book in the series.'

Video: A Kiss for a Highlander (The Georgian Rebel Series) by Jane Godman