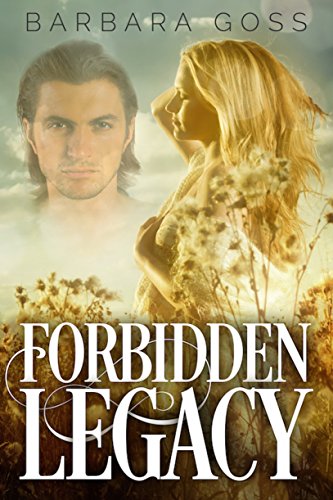 about this book: This book is my "baby" or the book that started my career. I had sent it by mail to every Christian publisher and all it did was give me a collection of reject slips. I decided to give my writing career one more chance, and borrowed money from my credit union and traveled from NY to FL for a Christian Writer's Conference and there, three Christian publishers (two of which had refused it by mail), bid for the book. I chose Fleming Revell since they published all Grace Livingston Hill's books and she was my biggest influence in writing. Forbidden Legacy won first prize as the best fiction at the conference. I still have the photo of me accepting the award wearing clothes I'd worn for two days since the airlines lost my luggage.

Forbidden Legacy is about a young pampered woman who travels to Texas to inherit a ranch from a grandfather she'd never met. Her father and uncle had been killed by Indians, and the women at the different stagecoach stops had told her horrendous stories of brutal Indian raids so by the time she reached Dodge City, where she was to meet someone to escort her to the ranch in Texas, she was terrified of Indians. Then, she discovered that the man who was to escort her was an Indian and the whole ranch was run by Indians since her grandfather had remarried an Indian woman.

Sarah Clarke had to learn the hard way that all people no matter how different all have individual personalities and that they had feelings the same as she had. The book is a good example for people with racial indifferences.

Did I not mention the romance? Oh, yes! A steamy albeit clean romance between herself and Storm, our hero but there is a big obstacle in the way, his promise. He is a man of honor and had made a promise and meant to keep it no matter what. Sarah fights this promise in every way she can and finds that God found the way for her to love her enemies into submission.

I enjoyed the extensive research that went into this book since I've always been fascinated by Native Americans. I had to call them Indians in the book though because Native American is a newer term. I love Native Americans, and I read many books about the tribes that appeared in the book. I fell in love with Sarah and Storm, and I think my readers will too. My working title was "Storm's Heart" but the publisher chose Forbidden Legacy.

What I want to say to my readers is, don't let anything stop you from achieving your dreams. Mine was to be an author, and I was told that because I didn't have a college education I could never achieve that dream. With God behind my writing, how could I not succeed?