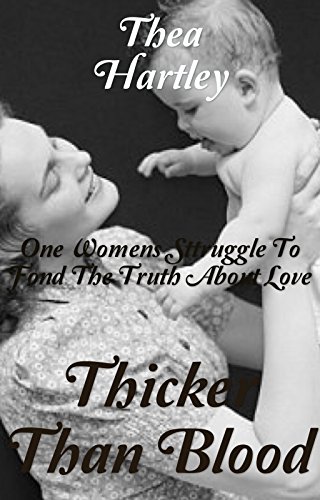 about this book: "Thicker Than Blood" began as a short story about a fictional character based in a real life environment.

A factory was at the at the centre of a Biographical trilogy about Tom Horton who rose from a gypsy childhood to become a wealthy entrepreneur. He made his fortune from manufacturing birth control devices. The factory started in 1912 and over the years, employed hundreds of people.

Women who worked on the production line kept their occupation hidden as it carried a social stigma. They would pretend to be doing totally different work...even to close family. This inspired the character of Marie.

The story was designed to look at the life of a fictional female employe who lived in a small town during world war 2 and was employed there.

The chief character Marie Morgan marries her childhood sweetheart. They lose their first child and the couple never conceive again. When war begins, Marie looks for compulsory war work and is given a job in the factory.

Like many women during that time she discovers a freedom she never had before. Her own money, independence a better life style. It may be the war, with its blackouts and rationing, but actual fighting and bombing do not go on where she lives. In some ways she and her husband prosper.

Davy, her spouse works as a miner, and, as such is not conscripted into the forces as he is in a reserved occupation.

However, tragedy stikres. Marie finds herself in a heart breaking situation. She leaves her job, her friends and independence behind. Her life becomes one of fatigue and poverty. At her lowest, vulnerable edge, she does something completely against her beliefs.

Life improves as she discovers people who become true and loyal friends, helping her to build a new life.

However, her past actions have consequences and she finds herself in an untenable situation.

There is no way out. Marie is desperate.

Then someone offers her a possible solution. But can she take it? Can she stick to the plan which might solve her problems? If she doesn't, then here whole life may come crashing down and all her sacrifices will have been in vain. Ultimately it is up to the God of fate...will he work for or against her?

A heart wrenching story of love, loss and sacrifice.