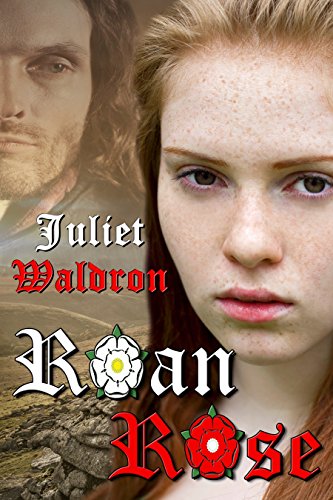 about this book: I met Richard as a tween, sitting on the floor behind a bar in Barbados, reading. The book was "The Daughter of Time" by Josephine Tey. I was always reading; this book I'd fished out of a wastebasket in the hotel library--back in the '50's when little guest houses had such things. I was quickly filled with a desire to learn more about the Richard and his world. I started reading histories--Paul Murray Kendall's "Richard III" had just been published. Tales of Dickon and his cousin Anne filled my head for years--and years--until I had the time, after leaving 9-5, to write one down.

"Roan Rose" is the story of Rose Whitby, picked up like a stray puppy by the Countess of Warwick to be a nurse/servant for her sickly daughter, Anne. Of course, Richard is there too, a young Duke with a twisted spine, who has been sent for knightly training to the house of Anne's father. The three children form an unequal friendship, for Rose can never be anything but a servant. As they all mature, Rose shares Anne's experiences of war, of an early marriage and widowhood, of abduction, terror, and rescue. When Richard and Anne finally marry, as they've always desired, Rose is set aside and given a man of her own. Everyone supposes that will be the end of her involvement with her royal loves, but the fate which engulfs them is stranger than anyone could have imagined.

"Loyalty Binds Me" was King Richard's motto. However, "Loyalty Binds Her" might be the blurb for this story. Rose's love and loyalty will be tested to the limit; she will give her master and mistress all she has.