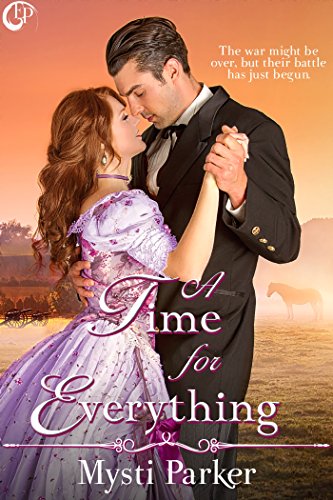 Book: A Time for Everything by Mysti Parker

about this book: Can a Confederate widow and a Union veteran find their way into each other's arms amidst the turmoil of Reconstruction?

It's early April, 1866 in Brentwood, Tennessee. Twenty-five-year-old Portia McAllister leaves everything behind to start a new life some 40 miles away in Lebanon, Tennessee. She wants to escape her grief, but it won't be an easy task, because Portia is entering enemy territory as a Confederate widow in a Union household.

This book was inspired by a trip to middle Tennessee area in 2010, where we toured places that were ravaged by the Civil War. Franklin, Nashville, Lebanon--all these beautiful Southern towns were torn apart, not just in battle, but by divided loyalties. From reading several novels like Robert Hicks's "Widow of the South" and many real accounts, I knew those inner wounds did not heal quickly after the smoke cleared.

The idea of a couple who were once on different sides of the struggle began to take root. A little bit of my all-time favorite romance, "Jane Eyre," helped to form Portia's character, as did real-life diaries like "A Widow's Civil War" by Confederate widow Cornelia Peake McDonald.

Writing commenced, but after a little while, I realized I didn't have the time for research or the skill to quite do the story justice. So I put it aside until 2013, after I had three other novels under my belt. By spring of 2014, it was done and accepted by two publishers. I chose to go with EsKape Press, and I'm glad I did.