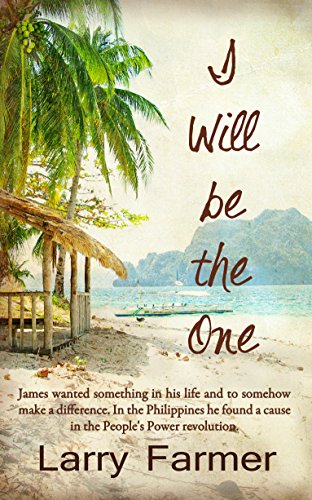 Book: I Will Be the One by Larry Farmer

about this book: This story is written in the first person as fictionalized memoir of a true story. It is based in the mid-1980s in the Philippines during the last stages of the twenty year dictatorial rule of Ferdinand Marcos.

The two main characters are James, from Mississippi, and Lois from Ohio. They are two Peace Corps Volunteers placed in a former no man's land in the southern Philippine island of Mindanao. As they live their day to day, sharing their American upbringing and skills among the most unfortunate of an impoverished Third World Country, there are political assassinations, Communist insurrection, and the aftermath of a civil war on the island between Christians and Muslims. With American military bases in the country, it is also part of Cold War era politics.

James works for a bank among small farmer clientele. Lois teaches in a nearby high school. They not only need one another for strategic reasons, but come to depend on each other for emotional support. In time this blossoms into a romantic relationship.

An operative enters the picture causing enough turmoil in their lives that not only is their mission jeopardized, but also their safety as well. This coincides with open rebellion by facets of the military against Marcos, joined by the political opposition, led by Cory Aquino, wife of a slain opposition leader, and the Roman Catholic Church, led by Cardinal Jaime Sin. Millions of rebel supporters pour into the streets of Manila, armed only with their love of freedom, Bibles, and rosaries. This became the People's Power Revolution that forced Marcos into exile.