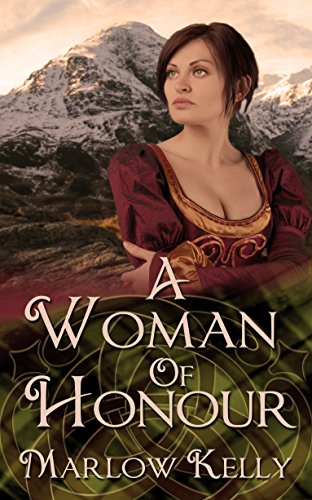 Book: A Woman of Honour by Marlow Kelly

about this book: A Woman of Honour is a quick, action-packed read. I wrote this short book after watching Neil Oliver's documentary A History of Scotland.

I always have a lot of characters floating around in my head. (I'm not crazy, honestly.) Sometimes they get in the way and demand my attention. This was the case with Duncan Campbell. From the first he was a strong, abrasive, and endearing character.

But at the time I wasn't ready to write a full-length novel. I didn't know enough about rewriting and self-editing to produce a full length polished draft. Could I write a shorter piece and include action, romance and a happily ever after ending? That was the challenge.

And then Isabel Douglas whispered in my ear. She was tall, thin and convinced that no man would ever find her attractive. In her own sweet way she was every bit as determined as Duncan. Isabel was also a woman on a mission to deliver an important letter to Robert I, King of Scotland who was in hiding somewhere in the Highlands.

Then the idea came to me that they would meet in the absolute blackness of a dungeon, a place where there isn't even a slither of light. What would their impressions of each other be without the distraction of physical attraction?

Of course, when your main characters are imprisoned in a dungeon they have to escape otherwise there's no story. That's where the action comes in.

I actually wrote this novella for myself, but a friend read it and suggested I submit it to her publisher. The Wild Rose Press graciously offered me a contract.

A Woman of Honour is a short quick read meant to fill an hour or two, an afternoon on the beach or an evening by the fire.