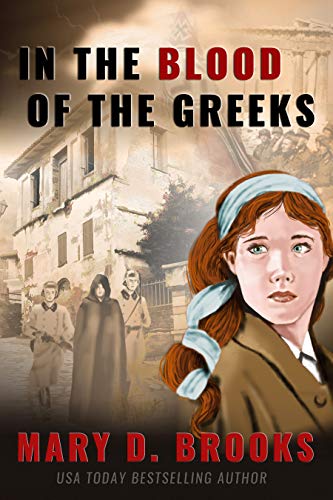 Book: In The Blood Of The Greeks (Intertwined Souls Series Book 1) by Mary D. Brooks

about this book: In the Blood of the Greeks was inspired by my next door neighbour who was an Auschwitz survivor and by my grandfather who was a Greek resistance member during World War II.

It's the story of two women who are on opposite sides working with one goal in mind and that is to help Jews escape. Even they have hatred for one another, they forge a friendship.

It's a story of hope, forgiveness and fighting for the greater good and not wanting anything in return.

There are far too many unsung heroes; ordinary people doing extraordinary things that will never know about and this book is filled with these kind of people.

Research for this novel was long and hard but very satisfying. My grandfather's stories about the war and the love from my next door neighbour stayed with me as I was writing this novel.

The title came from the Greek National Anthem where in part it says "thy raimant was dyed in the blood of the Greeks". I thought that was an extraordinary title for a book so I used it. It fits the sacrifices my characters made.

What would I say to the readers...this is a story about not judging others without knowing more about that person. Just when you think you have figured it out, it turns out you didn't know. It's about sacrifice and giving of oneself even if it doesn't benefit anyone other than the person helped.

Video: In the Blood of the Greeks Book Trailer by Mary D. Brooks