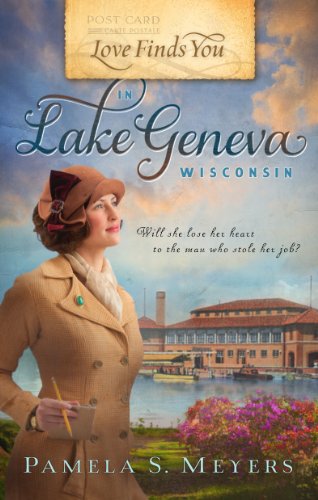 about this book: Tired of reporting on society doings, Meg Alden yearns to for a promotion to general reporter at the small newspaper where she works. But in 1933, hard news reporting is only for men and her crusty boss refuses to budge from that tradition. A reporter position opens up, but before she has opportunity to convince the boss to give her a chance, she learns that Jack Wallace, the handsome new hire, has been assigned the job.

Jack is only marking time, knowing he is in line to inherit his dad's big city newspaper after he's cut his publishing teeth on the smaller weekly. Choosing to keep that information to himself, he suggests he and Meg join forces and work together on reporting the construction progress of the new recreational building. As much as Meg wants to dislike the man who "stole" her job, how can she when he continually sends her pulse into overdrive whenever they are together?

I grew up in Lake Geneva and was blessed with the opportunity to write a story set in my hometown in 1933 when the Rivera building with its magnificent ballroom was constructed. The ballroom drew many of the big bands through the years and today, is nearly exact replica of how it appeared at the time of my story. I spent months pouring over microfilms of the local paper (where Meg and Jack work) from the time of the story, making sure I had the details of the building of the Riviera and the town as exact as I could make them.

I loved developing the characters of Jack and Meg, showing that with a strong faith in God and leaning on Him we can be successful at whatever job we are given and wherever we are,