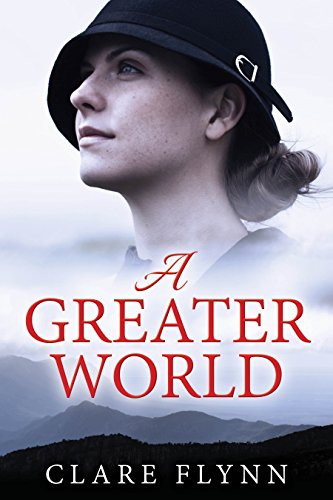 about this book: Elizabeth Morton and Michael Winterbourne come from different worlds and in normal circumstances should never have met.

A tragic accident is the trigger for Michael to leave his small village, his fiancée and his life as a lead miner. A letter from her father in Australia asking her to join him in Sydney where he's lined up a husband for her sets Elizabeth's comfortable middle class world spinning. She has no intention of complying until her brother-in-law takes away her choices.

Elizabeth and Michael meet on the SS Historic and find they have more in common than expected. But falling in love is not enough to guarantee happiness. The unexpected death of Elizabeth's father, the secret he had kept from her and the arrival of the Prince of Wales on a state visit to Australia all conspire to throw her plans into chaos and compel her to make a difficult decision that will change her life.

A Greater World is set in the 1920s in the beautiful Blue Mountains of New South Wales. I began to write this book (on and off) after my first visit to Australia in 1998. My plans were derailed when I was burgled and the thieves made off with both my laptops - I was working on one and had it backed up on the other. I was so disheartened I wanted to give up. But I read that TE Lawrence (Lawrence of Arabia) left his 700+ page manuscript of Seven Pillars of Wisdom on a train and sat down and wrote it all again - so I had no choice but to try and do the same. In the end I think the burglars did me a favour as I know it came out better second time around.

I research my novels very carefully. The SS Historic on which Elizabeth and Michael sail to Australia from Liverpool is closely based on the SS Ceramic of the White Star Line, which was sunk of the Azores by a German submarine in the second world war with the loss of all but one of the 656 people on board. For many years it was the largest ship on the Liverpool to Sydney run. The Ceramic had no classes - so perfect for throwing Michael and Elizabeth together. I changed the name to the fictional Historic to allow me some liberty.

I visited Australia several times in the course of writing A Greater World and spent six months living and working in Sydney.

• "A hugely compelling story that was difficult for me to put down."

• "Her characters evolve and grow with her plot, which takes us from the end of the Great War to the eve of the Second and from England to Australia; from coal to cocaine, from mean streets to wealthy drawing rooms and subtly callibrated stops along the way."

• "The book's non-stop drama had me mentally begging for a happy ending and you will have to read it for yourself to find out what happens. A wonderful story, excellent location choices and characters that feel like friends."

Video 1: A Greater World by Clare Flynn
Video 2: How I write