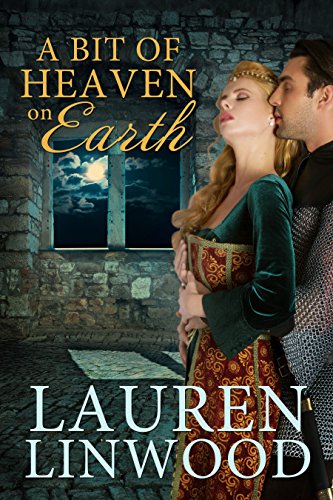 Book: A Bit of Heaven on Earth by Lauren Linwood

about this book: I'm a former history teacher and voracious reader, and I've combined my passion for those two things in my historical romance writing. Although the bulk of my teaching was in US History, I've always been an Anglophile at heart.

The Hundred Years' War fascinates me, as England and France were the superpowers of their day. War, though, is expensive--and so the practice of ransoming captured knights back to their families became a dirty little secret that helped fund a country to fight another day. It led me to wonder what if a family didn't pay the ransom for their noble son? What would happen to him, physically and mentally? I knew then that I had my book, which became A BIT OF HEAVEN ON EARTH, the story of Gavin of Ashgrove as he loses his family, his good name, his title, and his lands. Now penniless, where would he turn?

I also enjoy writing a strong heroine, and this novel has one in Elizabeth of Kentwood. A headstrong tomboy, her father can't seem to marry her off to get her out of his hair. When he does, it's to England's most famous warrior--but he's old and tired and has outlived all his wives. In Elizabeth, he sees intelligence and passion and a desire to do good for others. He molds her into a compassionate leader, much as he did the many knights he fostered over decades.

Naturally, Gavin turns to his mentor, this dying, fabled warrior, when the chips are down. And when Gavin and Elizabeth meet? Two strong-willed people collide at full speed!