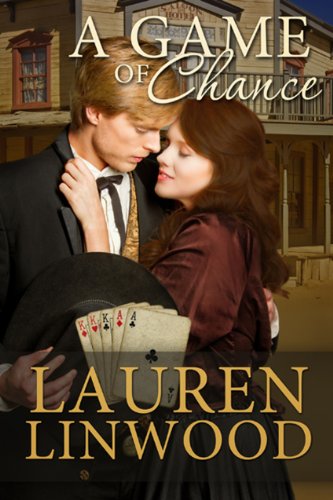 Book: A Game Of Chance by Lauren Linwood

about this book: Ideas for a book can come from many places. The seed that planted and became A GAME OF CHANCE came from three different sources!

First, I read a book about the California Gold Rush. In the 300+ pages, I found a passage that was less than two pages long which discussed the Revolutions of 1848 in Europe and how it was not only men who fled these--but also women. A handful of those women made their way to Sutter's Mill and in the space of a single year, made a killing "on their back." Many went on to marry and remained in San Francisco as well respected members of the community. I decided Lilian would be one of these European refugees, a widow with a small child in tow, who took advantage of this situation. Her daughter would become my heroine.

Second, I'd always heard the phrase "separated at birth" and began thinking, "What if that actually happened in real life?" Thus, my novel opens with a woman giving birth to twins who literally are separated at their birth. They have no knowledge that the other exists--and they meet in San Francisco twenty-five years later.

Last, an incident from many years ago kept nagging me. I'd gone out with my future husband twice. He had a moustache, his hair was parted in the center, and it was past his collar. We'd scheduled a third date, and when I opened my door, a hot guy stood there. I wondered if a new neighbor had moved in. Then he smiled, and I knew instantly it was my date. He was clean-shaven, with short hair and a side part. It was surprising how little changes made such a difference in his appearance. I used that as I wrote about my separated twins.

Add those three things into the mix, stir in some conflict, and A GAME OF CHANCE became a reality!