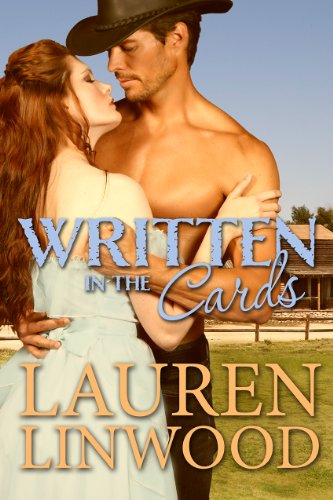 Book: Written In The Cards by Lauren Linwood

about this book: After the Civil War, politicians realized that an educated citizen made for an informed citizen and better worker who could contribute more completely to society. Funding for public education cranked up, and more people attended school than ever before. Because of this, the US literacy rate skyrocketed.

Especially now that employers began giving "half-holidays" on Saturdays, average Americans had some leisure time for the first time. And the most popular activity included reading anything they could get their hands on.

The answer? Dime novels. They were cheap, full of adventure and daring, and as wildly popular as the Harry Potter series of today. Many focused on tales about the American frontier.

I decided the hero of my next western historical romance would be a dime novelist. Nope, that was NOT okay with Maggie, the heroine that sprang to life in my head. Stubborn, smart as a whip, and a woman with a terrific imagination, Maggie DEMANDED to be the writer. This era did have some women writers, but almost all of them wrote under a man's pen name. Maggie is no exception, and Lud Madison is her alter ego.

My hero Ben takes a roundabout route in becoming a gambler, but when he meets Maggie, she believes he's a cowboy. She charms him into an interview since her next dime novel will be about cattle drives, and she think Ben would make the perfect hero for her upcoming effort.

That's how the title came to be. I combined Maggie's occupation of writer and Ben's as a gambler and voila--WRITTEN IN THE CARDS became a reality.