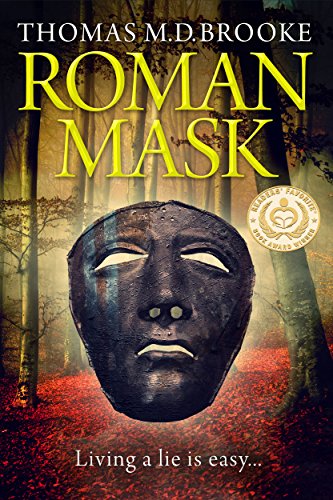 about this book: Turning a negative into a positive – the inspiration behind Roman Mask

It was an October night, and I was returning home from a night out with a few friends in my local pub in London, when something happened that changed my life dramatically. The nights were closing in, so it was already dark by the time I left the pub, but I was in a good mood. I'd recently returned from a trip to Pompeii , so I'd been telling everyone of my excitement at walking through the Roman streets, marvelling at the murals and depictions on the well preserved houses, and laughing about the seedier aspects of the ancient city – the brothels and street graffiti that had also survived the great volcanic eruption of AD 79.

It was probably because I was so preoccupied with these thoughts, that I didn't see the guy who came out of an alcove and wrapped an arm around my neck. My first thought was, 'Am I being mugged? Who's going to mug me??' – I'm a big guy, over six feet tall and I keep myself in pretty good shape, so I'd always thought the chance of this happening in London were pretty remote. But I was wrong.

When the second guy came out from behind a car, then the third from behind a bush I knew I was in trouble. This was no ordinary street robbery; these guys were out for blood, and the three of them surrounded me and between them punched, kicked, and smashed me to the ground, beating me to an inch of my life.

Afterwards, as I tried to hobble home – one of them had crushed my foot, to prevent me from getting up – another passer-by saw me covered in blood and called an ambulance. I was lucky, I got to live another day. And within a few weeks, my bruises healed, and I began to walk without a limp, all physical signs of my encounter disappeared. But that was just the start of my nightmare.

I was completely unprepared for the mental-trauma that such an incident inflicts on you. That winter was torture for me. After any night out, I was terrified to go home; I found I was scared of the dark, constantly thinking that people would jump out of the shadows at me. I'd never previously been a heavy drinker, but over that winter I found I needed to drink a lot just to give me the courage to walk home. I could have called a taxi, but then people would wonder why I was taking a cab for such a small journey – this became another all-encompassing fear: that others would find out about my terror. This might seem irrational, but at the time, that fear was almost as great as being mugged again.

Those first six months were very difficult, but then as the nights started getting lighter, an idea came to me. After visiting Pompeii I'd been searching for a character to be a lead in a novel set in ancient Rome – someone who fully embraced the entirety of Rome, its seedier aspects as much as its magnificence. Why not put my experiences to good use, rather than having it a weight bearing me down, let it be something that produces something positive. At the time, the news on the television was full of stories of soldiers returning from Iraq and Afghanistan with post-traumatic stress and it made me think how soldiers dealt with such issues in the ancient world. My experiences had shown me the power that traumatic events can play on the mind, and I quite simply didn't believe anyone who claimed that in the ancient world such a thing was not a concern because life was different back then. The human mind was biologically exactly the same then as it is now, and just as fallible to conditions we now diagnose and understand the importance of.

So I came up with the character Cassius, a great soldier, but someone who'd been affected by a terrible battle a few years before in the forests of Germany. I knew from my own experiences how easy it was to fall into a trap of blaming yourself for your own perceived weakness, and I knew how living a lie to hide that same weakness can become a part of life. I then started my novel in Rome so I could show Cassius being seduced by the many vices of that ancient city – something that is all too easy to do under such circumstances. I then returned Cassius to Germany where he learns to understand and come to terms with his fears, just as I did whilst writing my novel. The novel culminates in the Teutoburg forest and one of the most dramatic and historically significant battles of the ancient world. Cassius needs to draw on all his courage and strength in the midst of that terrible event.

I'm now pleased that I encountered those three men, that fateful night in October. It was a terrible experience, but it gave me something so much more – I wouldn't change it for anything.