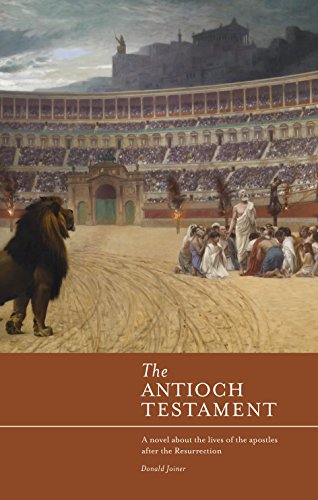 about this book: For years I've been intrigued by the remarkable transformation of Jesus' apostles after His Resurrection. Earlier, they had been a motley collection of fishermen, laborers and revolutionaries seeking the restoration of David's Jewish kingdom. The New Testament tells us lots about them before the Resurrection, but very little afterward.

What happened to them? Where did they go? What did they accomplish? How did they die? The gospels are silent. The Antioch Testament is a historical novel that attempts to complete the story based on early church traditions.

The Antioch Testament begins during the American occupation of Iraq. An army patrol rescues a frightened group of Iraqi Christians from Iraqi insurgents. These refugees had an ancient Aramaic manuscript in their possession they insist on giving to the army chaplain. Afraid for the manuscript's safety in war-torn Iraq, the chaplain manages to send it to America where eventually world-renowned scholars begin the tedious task of translating it.

To their amazement, the scholars find that the manuscript is a first century AD testimonial describing what happened to Jesus' apostles after His Resurrection written by Ignatius, a late first century bishop of Antioch who knew many of the apostles personally.But, unknown to the scholars a sinister Iraqi insurgent group has traced the manuscript to America and they resolve to get their hands on it or destroy it.

An early reviewer had this to say: "The Antioch Testament is a great book. I started it in the evening, planning to read only a few chapters before bed. Instead, I was up well into the morning, obsessively turning the pages until I got to the very end."