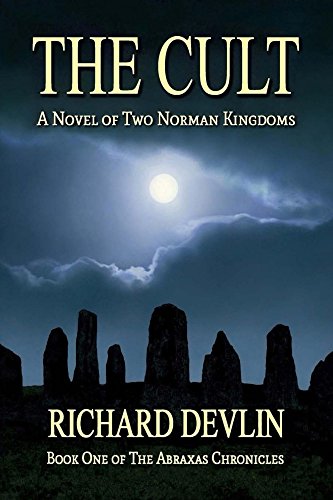 Book: The Cult - A Novel of Two Norman Kingdoms (The Abraxas Chronicles Book 1) by Richard Devlin

about this book: I wrote The Cult: A Novel of Two Norman Kingdoms after visiting Sicily and falling in love with its landscape and rich historic past. As an artist, art critic, and teacher of art and art history, I've always been a fan of medieval art and architecture, but the unique combination of Norman, Arab, and Byzantine styles I found in Sicily especially impressed me. Noting how few historical novels there were set in Sicily's golden age—the twelfth century under Norman rule—I decided to write a novel set in that time and place. But I also had another goal; to break away from the boudoir or battlefield genres that dominate present-day historical novels. The Cult is the story of three young pupils of an enlightened teacher who struggle against both a dangerous cult and the limitations of their age. Elise, the niece of an earl, resists the marriage imposed on her; Edmond, strives to prove himself worthy against his family's opposition; Martin, a gay man, finds a way to live out his sexuality despite the prohibitions of the time. The character of Martin, in particular, breaks the mold of most novels of this period in which gay men are almost always depicted as either pitiful victims or perverted villains.