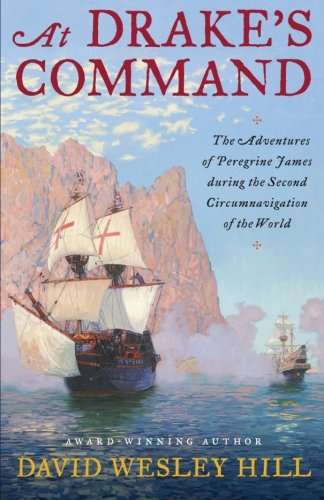 Book: At Drake's Command - The adventures of Peregrine James during the second circumnavigation of the world by David Wesley Hill

about this book: At Drake's Command is a thrilling historical adventure on the high seas during the circumnavigation of the world by Francis Drake, 1577 - 1580. Although this is a novel, I have attempted to present an accurate portrayal of the voyage, embellishing history rather than manufacturing it. Wherever possible, I have used the actual words of my characters, allowing them to speak for themselves across the divide of time.

According to one reviewer, it's "the best nautical story I have read since I turned the last page of The Final Unfinished Voyage of Jack Aubrey by Patrick O'Brian near a decade ago" (A Fair Substitute for Heaven). It's "highly recommended" (Historical Naval Fiction), "a godsend to readers" (Awesome Indies), and the Los Angeles Maritime Museum Library has noted, "Hill is in good company with C.S. Forester and Patrick O'Brian." "You'll be planning your day around the next opportunity to pick it up again and devour its 424 pages" (The Literate Man).