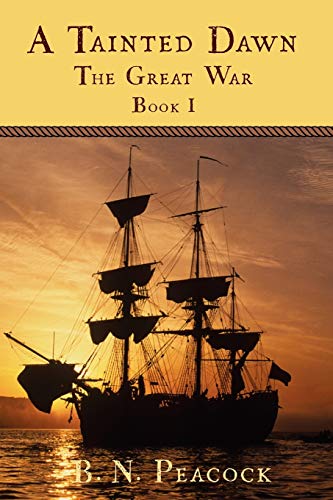 about this book: A Tainted Dawn is the first in a series of books covering the French Revolutionary and Napoleonic Wars from three different socio-economic and national perspectives. Edward Deveare represents aristocratic, naval England; Louis Saulnier, revolutionary, militaristic France; Jemmy Sweetman lower class England looking to the new United States. The title itself is a twist on Wordsworth's famous lines about the start of the French Revolution: "Bliss was it in that dawn to be alive, But to be young was very heaven!" As history proved—and the three youths discover—it wasn't.

The cover captures this feeling of a brooding dawn, together with the naval interest. Years of research and travel backed the writing of this book. If I learned one thing from the fifteen years it took from inception to publication, it was that no one person or nation is ever all right or all wrong. This is the point I hope my readers will see as well. A Tainted Dawn should interest not only naval fiction enthusiasts, but also aficionados of land battles as well.